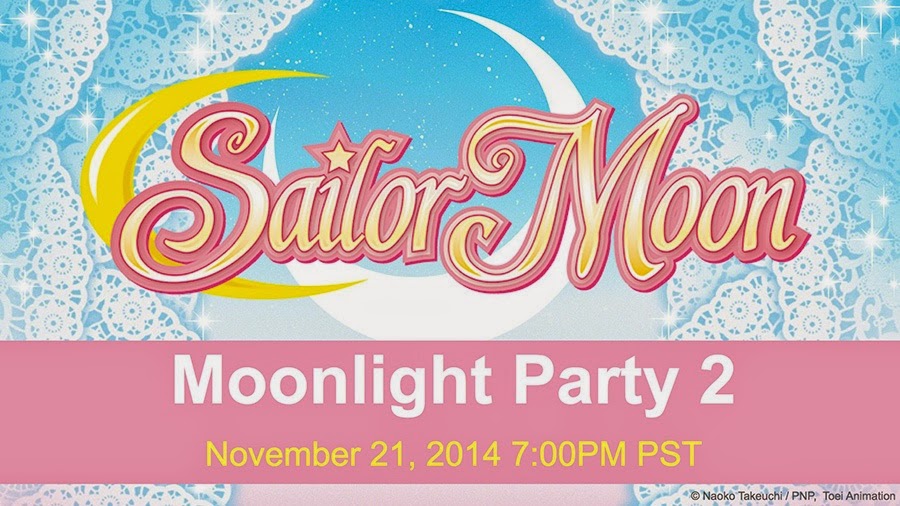 VIZ Media, LLC (VIZ Media), the largest distributor and licensor of manga and anime in North America, continues to celebrate the triumphant return of the classic SAILOR MOON anime series and marks the premiere of the latest high definition Episodes 24-36 – featuring the brand new English dub cast – available to stream on Neon Alley and Hulu starting on Friday, November 21st beginning at 7:00pm (PST). The release time and date for the remaining English episodes of this epic first season will be announced during the event. These latest exclusive dubbed episodes will be available for a limited time only during the Holiday season!

Fans can join in on the festivities with VIZ Media and Neon Alley by attending Moonlight Party 2: A Celebration of SAILOR MOON Reborn! Building on the success and positive fan feedback following the first Moonlight Party held in September, the free virtual party will take place once again as a unique live stream event on VIZ Media’s YouTube channel at: http://bit.ly/SMMnLtP2 beginning at 7:00pm (PST) on Friday, November 21st.

Fans are invited participate in the event and stream SAILOR MOON Episodes 24, 25, 33, 34 and 35 (showcasing Jupiter, Venus, and Princess Serenity) via Neon Alley/Hulu and also take part in a real-time Q&A with VIZ Media staff that will run throughout the evening. Viewers can submit questions throughout the event via YouTube, in the comments sections of the actual live stream (as available), or on the official VIZ Media Facebook page, and via Twitter using the special hashtag, #MoonlightParty,

Fans also can interact with members of the VIZ Media SAILOR MOON team, which will be present during the live stream to answer questions and offer lively commentary and little known information about the series and these new episodes. A SAILOR MOON trivia contest also will take place and fans and aspiring Sailor Guardians are invited to submit their answers via Facebook and Twitter to win special prizes. SAILOR MOON fans nationwide are also encouraged to share pictures from their own Moonlight Parties by using the hashtag #MoonlightParty on their favorite social media platforms.

Neon Alley is VIZ Media’s consolidated online destination for FREE streaming anime content in the U.S. with over 3,200 subtitled and English dubbed episodes and movies from more than 36 series!

In the latest SAILOR MOON episodes, Sailor Moon, Sailor Mercury and Sailor Mars continue their quest for the Legendary Silver Crystal as two new powerful allies join the fight. Sailor Jupiter is the tall and tough Guardian of Thunder, and Sailor Venus is the Guardian of Love and the most experienced member. Sailor Moon herself gets an impressive new power and learns more about the mysterious Tuxedo Mask. Could their distant pasts be intertwined, and does that have anything to do with the Moon Princess they seek? The final ordeal with Queen Beryl looms on the horizon, and it will take everything the Sailor Guardians have to be victorious!

“Thousands of fans joined us for our very first SAILOR MOON Moonlight Party, and the enthusiasm and love that was expressed for this iconic series inspired us to hold another event to mark the dub premiere of the concluding half of Season 1,” says Charlene Ingram, Senior Manager, Animation Marketing. “Not only will viewers catch the dub debut of Sailor Jupiter voiced by Amanda Miller, and Sailor Venus, voiced by Cherami Leigh, we’ll be sharing plenty of commentary and trivia, as well awarding lots of SAILOR MOON prizes. We look forward to everyone joining us and hope this event might inspire fans to hold some Sailor Guardian soirees of their own!”

Posted by Leroy Douresseaux at 5:15 AM