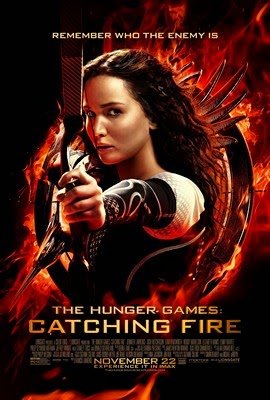 The Hunger Games takes place in a post-apocalyptic future, and what was once North America is now the nation of Panem.  Panem is composed of 12 districts and The Capitol, which rules over the districts. Every year, The Capitol takes one boy and one girl (called “tributes”) from each of the 12 districts to become contestants in The Hunger Games.  Part entertainment and part intimidation of the 12 districts, these games are broadcast throughout Panem, and the 24 participants must fight to the death until only one of them remains alive – the victor.

The Hunger Games: Catching Fire opens a few months after the first film.  Katniss Everdeen (Jennifer Lawrence) and Peeta Mellark (Josh Hutcherson) were the winners of the 74th Hunger Games.  Now, the young victors have returned to their home, the impoverished District 12, and President Snow (Donald Sutherland) is waiting for Katniss.  Snow is upset that the outcome of the most recent Games has sparked rebellion in the districts of Panem, with Katniss' actions in the Games being the inspiration for rebellion in the districts.

Katniss (“The Girl on Fire”) and Peeta (“The Baker's Boy”) are going on a victory tour through the districts.  During this tour, Snow wants Katniss to sell the untrue idea that her actions in the Games were out of genuine love for Peeta and were not an act of defiance against the Capitol.  This scheme doesn't exactly work out.  So Snow calls for the 75th Hunger Games to be special.  These Games will be a “Quarter Quell,” and the tributes will be selected from previous victors.  Katniss and Peeta suddenly find themselves in the Games again, and this time, the target on Katniss' back comes from players inside and outside of the Games.

Catching Fire is the middle book in Suzanne Collin's Hunger Games trilogy, although the third book, Mockingjay, is being adapted as two film.  However, The Hunger Games: Catching Fire doesn't suffer the fate of some middle films in a trilogy.  Sometimes, the middle film can come across as filler material, or it can be packed with too many characters that are not important or too many subplots that won't be resolved until the third film.  An example of that is Pirates of the Caribbean: Dead Man's Chest, which was a collection of pointless action scenes that didn't really serve much of a purpose beyond titillating young males and selling lots of tickets.

Catching Fire the movie is intense and gripping, almost every scene is important, not just to what came before or what will come after, but also to the story being told now.  When I reviewed the first film two-and-a-half years ago, I wrote that I could say without reservation that The Hunger Games captures the sense of the life and death struggle of Katniss and her competitors.  I can say the same for Catching Fire.  Like its predecessor, this movie is driven by character drama and by intimate man vs. man confrontations/encounters that freely range from sudden romance and friendship to cold-bloodied murder and assorted calculated cruelties.

I will say that I think this film offers more characters than the story can present in full-measure, not revealing how rich and how important they are.  However, almost every character does enough to be interesting or intriguing, and there are many excellent performances.  Donald Sutherland is even better and more menacing as President Snow than he was in the first film.  Woody Harrelson manages to further develop Haymitch Abernathy, surprisingly showing that there is much more to the character than one might think.  Josh Hutcherson makes Peeta Mellark the dashing young hero and co-lead that he could not be in the first film, even if that was the intention.  And I'm always happy to see Jeffrey Wright, although I wish his character, Beetee Latier, had more meat on the bone i.e. substance.

Still, as was true in The Hunger Games, Jennifer Lawrence is everything to Catching Fire. Whatever problems this film may have, Lawrence’s skill-set as an actor delivers a performance that glosses over narrative and cinematic glitches.  She is a true movie star, and her radiant presence bleeds across the screen, leaving me awash in the essence of Katniss.  Pardon my lack of articulation, but Jennifer is the real deal.

In the first film, we watched a young woman, Katniss, who was a poor nobody, struggle to survive and ultimately to triumph, becoming a star and a legend.  Catching Fire depicts Katniss' struggle to accept her fate.  The adventure is calling the hero, and she has to be dragged towards her destiny.  This kind of story is an archetype, and when told correctly, it can be mesmerizing.  So, as she did before, Jennifer Lawrence makes The Hunger Games: Catching Fire more than it ought to be.


Posted by Leroy Douresseaux at 5:14 AM