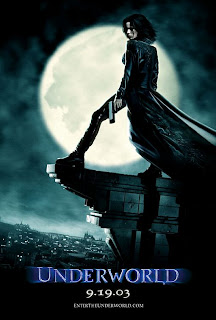 In the 2003 film, Underworld, there has been a war between the Vampire and Lycan (Werewolf) clans for about 1000 years. The film focuses on Selene (Kate Beckinsale), a young vampire warrior known as a Death Dealer. The Death Dealers are the ones who hunt, track, and kill Lycans. During a hunt at the beginning of the film, she discovers two Lycans following a young American medical intern, Michael Corvin (Scott Speedman). Michael is the key to the Lycan leader, Lucian’s (Michael Sheen), plot to unite the two warring species, but Selene discovers that Michael is also advertently a link to a centuries-old conspiracy between Lucian and the Vampire’s current leader, Kraven (Shane Brolly). As the web of conspiracy broadens, Selene must use her resourcefulness and martial skills to save her clan and Michael.

Underworld (2 Disc Unrated Extended Cut) contains 12 minutes of extra footage, which amounts to more backstory on Michael Corvin and the Lycans, a new battle scene at the end, and a subplot involving the sexy and catty, Erika (Sophia Myles). There is also 11 minutes of recut or “replacement footage.” According to Wiseman’s commentary, this is not a “director’s cut,” because he cut the 12 minutes in the original film for pacing, and as he says, you’ll hardly notice the difference, as I didn’t.

I liked the film the first time I saw it and I like it even more the second time. The movie is a blend of Blade, The Crow, and The Matrix. Conceptually, it borrows from the Blade franchise, but visually, it’s takes from The Crow and absolutely leans on and loots The Matrix. However, it is a superbly made bit of fluff that is divinely tasty eye candy. Although the concept and script are full of holes, it’s kind of like a gorgeous looking high-concept music video with much more story than music video normally have. By the way, “unrated” doesn’t mean we get to see skin from Ms. Beckinsale. This is a must-have for hardcore fans of the film, even if it means dumping the first DVD edition.

NOTES:
DVD includes a 48-page Underworld comic book and a 16-page production sketch booklet, which contains several storyboard-to-screen comparisons. Disc 1 contains the extended cut of the film with (1) director and cast (Ms. Beckinsale and Speedman) commentaries; (2) outtakes; (3) the American Movie Classic (AMC) television special “Fang vs. Fiction”; (4) two TV spots; (4) and previews of four (then) upcoming movies distributed by Sony Pictures. Disc 2 has several features including a music video by the band Finch (“Worms of the Earth”) and several looks at designing the look and sounds of the film.

Posted by Leroy Douresseaux at 1:40 PM