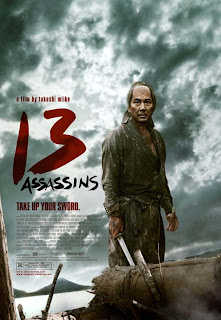 13 Assassins (Jûsan-nin no shikaku) is a 2010 Japanese period drama (a jidaigeki) from prolific director, Takashi Miike. This samurai epic is based on a true story and is also a remake of the 1963 Japanese film, Jûsan-nin no shikaku. The story is about a band of samurai warriors out to kill a tyrannical young lord. 13 Assassins is also one of the best films of 2010.

The film is set in the last decades of Feudal Japan, when the era of the samurai is waning. The sadistic young Lord Matsudaira Naritsugu (Gorô Inagaki) rapes and kills at will. He is seemingly untouchable because he is the former Shogun’s son and the current Shogun’s younger brother. After Naritsugu’s actions lead to the destruction of a prominent family, a senior political figure, Sir Doi (Mikijiro Hira), decides that Naritsugu must be killed. Doi hires Shinzaemon Shimada (Kôji Yakusho), an older samurai whom he can trust, to assassinate Naritsugu.

Shinzaemon, who was once a Shogun’s samurai, gathers 11 other samurai, including his nephew, Shinroukuro (Takayuki Yamada), and the 12 plan the assassination. Lord Naritsugu is traveling to his family’s territory, so Shinzaemon plots to steer him to the small village of Ochiai, in the province of Mino, where they will ambush him. Along the way, Shinzaemon adds a thirteenth member to his group, a mysterious woodsman who says his name is Koyata Kiga (Yûsuke Iseya). Meanwhile, the assassins learn that Naritsugu’s security detail is much larger than it was supposed to be.

13 Assassins is the first Takashi Miike film I’ve seen. Before this movie, I’d heard of him via the controversy around his work, such as Ichi the Killer (2001) and his episode, “Imprint,” of the “Masters of Horror” television anthology series. In 13 Assassins, Miike certainly doesn’t spare the audience of blood, dismemberment, and assorted wanton murder. Lord Naritsugu is one of the vilest characters I’ve ever seen depicted on screen, and he is the instigator of some of the most vicious murders portrayed in the 13 Assassins. Kudos to Gorô Inagaki for his brilliant performance as Naritsugu.

However, the depictions of violent death both in battle and in character drama shouldn’t be the only thing people take away from 13 Assassins. What audiences should recognize is Miike’s supreme skills as a helmsman, particularly as a director of this grand, historical epic. In 13 Assassins’ climatic battle, there are a little more than 200 combatants, but you might think there were 10 times more.

Miike and his collaborators and crew, in particularly director of photography, Nobuyasu Kita, and film editor, Kenji Yamashita, stage a fight that makes battles in films like the Lord of the Rings trilogy, Michael Bay’s Pearl Harbor, Cold Mountain, etc. look small. Such films use computers and digital technology to make their battles look super-sized, while Miike goes intimate – up close and personal – with the mayhem, desperation, and frantic pace of battle. That makes this battle look grand and glorious, but also sad, wasteful, and pathetic.

I find that with only a few exceptions, notably Shinzaemon Shimada and his nephew Shinroukuro, Miike misses the chance to really delve into the many wonderful characters fashioned by screenwriter Daisuke Tengan. That’s a shame because some of them have gripping back stories and engaging personalities. Still, that really isn’t much of a blemish, if it’s a blemish at all, on this superb film. 13 Assassins is one of the best samurai dramas I’ve ever seen, and it is one of the best historical films of the new century. Film lovers should not miss 13 Assassins.

Posted by Leroy Douresseaux at 12:45 PM