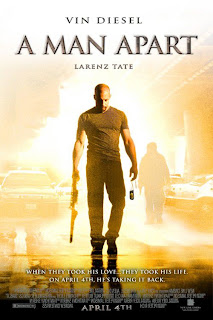 DRAMA/ACTION with elements of suspense

You can hear the sound of the playa haters cackling and giggling about Vin Diesel maybe not being such a big mega box office star after all. XXX (it made a lot of money, but not a lot of lot of money) was something of a disappointment at the box office and A Man Apart didn’t open well. The haters are the same people who were hanging onto Vin’s jockstrap just last year when he was mackin’ on the cover of GQ, among other magazines. Let’s get this straight before we move on; A Man Apart is a good movie.

Diesel is Sean Vetters, a hot shot/thug officer for the Drug Enforcement Agency (DEA). He and his partner, Demetrius Hicks, go way back to the days when they ran the streets as young men. They help take down an ultra-powerful head of a Mexican drug cartel (Gino Silva), but when that drug lord, Memo Lucero, goes down, a new and more vicious leader, known only as “Diablo,” fills the void. At Diablo’s behest, assassins kill Sean’s wife Stacy (Jacqueline Obradors) in a botched attempt on Sean’s life, and Sean becomes a man on a mission of revenge.

The story of a decorated cop who loses his family to murderous criminals and subsequently goes on a rampage for revenge is a venerable movie tradition. Steven Seagal’s career thrived on this plot for a few years. However, a well-worn sub-genre or tired story idea can get new life in the hands of talented people who can make it an interesting film, and that’s what happens here.

Director F. Gary (The Negotiator, Set It Off) Gray has a good touch with mixing drama and hardcore action. He takes a common idea and breathes life into this film. The action is hot, and the drama is pretty effective, even though it’s nothing new and fresh. Gray can take the most pedestrian idea and spin it into something worth watching; it’s a skill he learned during his days directing music videos.

Once again, the camera loves Diesel, and the screen magnifies his machismo. He doesn’t have to dig deep into the character; indeed, the character only goes deep enough to find the anger and passion needed to fuel the drive for revenge. However, Vin finds that gas and takes it to the limit. He has a convincing mad-on to kill some filthy, people killing drug lords, and he flings it at the screen in a spray of testosterone. We don’t get to see his character go deep undercover and force himself to live a lie in order to ensnare the wicked. This is simple; his character is an excuse to show some ass whipping, rapid gunfire, explosions, fistfights, and manly pissing contests.

Gray and Diesel know what they’re doing. The script doesn’t create richly layered characters; these are all law enforcement stereotypes, and Larenz Tate also does a fine job as the voice of reason in his partner’s life, the good guardian angel speaking soothing platitudes to his homey while revenge’s little devil whispers in Sean’s ear, “Go kick some ass!”

I liked this – not great but good. If you miss it in the theatres, you’ll want to see this good old revenge flick. Vin, as the avenging lawman, is just keeping a venerable movie genre alive in the tradition of Charles Bronson and Steven Seagal.