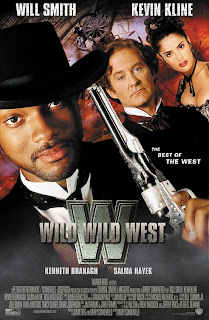 Wild Wild West is a 1999 science fiction film starring Will Smith. The film is based upon the 1960s CBS television series, The Wild Wild West. While the TV series features lots of gadgets, the film focuses on bizarre machines and steampunk technology.

Jim West (Will Smith) is a brash gunslinger with a quick mouth. Artemus Gordon (Kevin Kline) is a U.S. Marshal with a mind for inventions and disguises. Arliss Loveless (Kenneth Branagh), an embittered former Confederate, threatens the United States and President Ulysses S. Grant (also played by Kline). President Grant forces West and Gordon to join and to fight Loveless and his diabolical machines. The mismatched pair bickers its way to Loveless as the villain and his most devastating creation awaits the two heroes in Spider Canyon, Utah.

Sonnenfeld first came to acclaim as Joel and Ethan Coen’s cinematographer in films like Raising Arizona and Miller’s Crossing. He went onto shoot When Harry Met Sally and Misery for Rob Reiner. His career as a director has been hit (Get Shorty and Men in Black) and miss (Addams Family Values and For Love or Money). Wild Wild West falls somewhere in between, kind of leaning toward being a miss.

This film allegedly went through many reshoots to up the humor content, and the changes only served to make an already awkward film more awkward. Wild Wild West is a hybrid, and like the television series upon which it is based, “The Wild, Wild West” (1965-70), that was part western, part science fiction, part adventure, the film is also a mish mash of several genres. It is dressed up like a high priced costumed drama circa late 19th Century, set in the Deep South, Washington D. C., and the barren wild West. It has elements of sci-fi, specifically in the assorted gadgets, machines, and inventions. Its characters are clearly modern in their outlook and with their know-it-all sensibilities.

The script, by four veteran Hollywood writers with resumes full of scripts for action movies and cinema of the fantastic, bounces along the wall and stumbles about like a drunk. The plot is simple: stop Lawless before he defeats the U.S. The execution is senseless, very likely because too many hands were involved. No one person with a single vision was really in charge. West has many moments of genuine comedy and a few decent action sequences, but at its heart, it is a badly constructed, weak movie.

Will Smith does his best to carry the load, and his character is both brash and funny. His humor never comes across as strained, and Smith is seemingly comfortable acting captain of this sinking ship. His personality is lively, and his face, whether happy with his own jokes or stern with action readiness, is open and engaging. It’s a joy to watch him.

Kline is okay, but certainly miscast. Being older than Smith, he could have been the wise, older hand. He has his moments, but sometimes he just seems like a fifth wheel on a bike. He buries himself so far in make up for his duel role as President Grant that he gets lost in the part of this expendable character. He does a decent job in the part, but, like the movie, it’s not really worth noting.

Branagh is nutty and hilarious in his over the top performance as the psychotic, and vengeful Southern. Missing his lower extremities and riding a mechanical chair thing, Arliss Loveless is ridiculous, but he throws himself into a role so extreme and wacky, it belongs in a cheap novel or a superhero comic book. He’s simply a hoot. The rivalry between Smith’s West and Branagh’s Loveless is hilarious, and they make a very good screen pair.

Wild Wild West is a somewhat entertaining movie, but it is difficult to see where it had any potential to be better. The studio, Time-Warner, might have figured that it would be easy to sell a movie based on an idea with which people were already familiar, namely the television program The Wild, Wild West. They may have thought that audiences would readily accept a big budget update of this idea made with big named stars. It’s worked box office magic in the past, but, as in this case, it usually means average at best product. Even in its best moments, West is a light, fluffy distraction, forgotten soon after consumption.