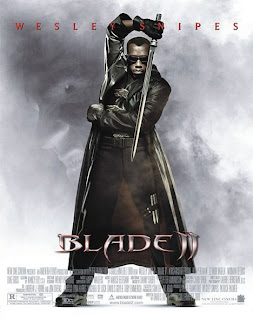 The human/vampire warrior Blade (Wesley Snipes) returns to do his thing, which is hunt and destroy vampires. While in Prague, Czech Republic to rescue his old partner Whistler (Kris Kristofferson), Blade receives a summons from Damaskinos (Thomas Kretschmann), the overlord of vampires. A new breed of creatures, The Reapers, is loose, and they feed on both humans and vampires. Damaskinos has formed a vampire tactical unit dubbed the Bloodpack to hunt the Reapers, but he also wants Blade’s assistance and offers a truce. The Reapers, however, led by the powerful Nomak (Luke Goss), prove to be a formidable foe.

Directed by Guillermo del Toro (Mimic), Blade II is that rare sequel that not only surpasses the original in quality, but also manages to be very different than the original. This is primarily through the efforts of del Toro; his sense of visual style has a huge impact upon this movie, and the look is seemingly based on art rather than music videos. (Stephen Norrington, the director of Blade, was also a director of music videos). He plays with light (natural and artificial) and darkness to set mood and tone, but also to suggest character motivation and plot elements. del Toro works like a painter, and he makes Blade 2 a wild ride, but reveals a thoughtful composition behind the camera.

In fact, the art department played a huge role in the look of the film. Wayne D. Barlow, the head creature designer, is famous in science fiction and fantasy circles for his drawings of aliens. Mike Mignola, the concept artist, worked on Atlantis: The Lost Continent for Disney. Timothy Bradstreet, a comic book artist and illustrator like Mignola and like Blade 2 storyboard artist Leo Duranona, designed the vampires in this film. Bradstreet’s work, according to him, probably influenced the look of the Blade character in the first film.

The dark and decayed look of inner city Prague is absolutely beautiful and mesmerizing even in the dankest and dirtiest sections. Kudos to the art directors and set decorators; they manage to make Blade 2 one of the most gorgeous looking movies ever that used low rent sets.

The eclecticism of the cast also adds to the aura of this movie. Snipes is clearly more confident and more comfortable in his role. He dropped his monotone delivery from the first film for more effective banter this time around, and he portrays Blade throughout this film more as the bold warrior who finished off the original film than the one we first saw.

Kristofferson’s role is a little weightier this go round. Whistler has an air of mystery and intrigue about him, and every time he is on screen, there is something about him that makes you wonder about his motivations. His verbal jousts with his replacement Scud (Norman Reedus) brings a little humor to the film.

Although Kretschmann and Goss are good in their respective roles as Damaskinos and Nomak, the Bloodpack are the true supporting vampire stars. Leonor Varela as Nyssa, Damaskinos’s daughter, brings beauty and a hint of sexuality to these mostly male proceedings. Fight choreographer Donnie Yen also has a small role as Bloodpack member Snowman. Ron Perlman also does a nice turn as Reinhardt, Blade’s opposite in the Bloodpack.

Visually exciting, intriguing, and beautiful, Blade 2 is unique horror movie simply because of the way it looks. It is an exciting action movie filled with leather suits and high tech chop-socky. The CGI fights scenes are a little off in some instances, but for the most part are very good and only add to Blade 2’s exceptional look; it gives the movie the feel of being something other than just another violent action movie. The fight scene between Nyssa and Asad (Danny John-Jules of the British sci-fi television series “Red Dwarf”) against Blade, alone, is worth the price of admission because it tops anything in the first film. It stands with some of the good fight scenes found in Hong Kong movies (thanks to Donnie Yen).

Guillermo del Toro has created a special cinematic visual experience in Blade 2, which adds to the appeal of seeing his other work. Simply put, in popular parlance, Blade 2 rocks, and it is worth repeated viewings.