John Carpenter's Night of the Living "Ghosts of Mars" 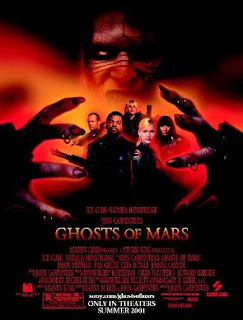 Ghost of Mars came and went so quickly in U.S. movie theatres that few had a chance to see it (although it’s debatable that many more wanted to see it). It is a low-tech sci-fi horror movie of the type that Carpenter is so good at making, and, for some, a Carpenter movie is always a special thing. Although not his best (that could be Big Trouble in Little China or Halloween) it’s far better than some of his lesser work (Village of the Damned and In the Mouth of Madness).

Set two centuries in the future on a Mars colony, a Martian police unit led by Pam Grier (Jackie Brown) and Natasha Henstridge (Species) are dispatched to a mining outpost to transport a dangerous criminal played by Ice Cube (Boyz in the Hood, Friday) to a prison outpost. When they arrive at the mining town, most of the inhabitants are missing. Henstridge’s Melanie Bradford and Cube’s James ‘Desolation” Williams must join together with a small band of survivors to fight miners possessed by vengeful Martian spirits determined to rid the red planet of humans.

Of all the actors, Cube is particularly shaky; obviously he was hired for his name value with black audiences. Certainly, he earned the assignment in particular to play himself, but curiously he seemed to have great difficulty doing just that. Erratic and inconsistent, he was on the verge of owning this movie if he’d only relax. His performance is forced and stiff; perhaps the SF milieu was a bit much for him.

Carpenter wastes Henstridge’s character, but that may have been more the writing’s fault than her acting. Bradford’s back-story hints at interesting possibilities, but this is an action movie, and one must never spend too much time on developing a female personality in an action movie.

There are, however, many very good moments in this movie that are quite chilling and invigorating: the discovery of the fate of Grier’s Helena Braddock, the spirit trapped in the land rover, Bradford’s possession and self-exorcism, the unleashing of the ghosts, the massing of a Martian army seen through a glimpse into the past, the reunion at the end, and many more.

The film is told mostly in flashback, and this makes it an effective ghost story. As Bradford tells the tale, the audience is on pins and needles waiting for the next bump in the night. One is anxious to get on with the macabre festivities, as if the revelation of each dark secret, which comes slowly, is necessary for the viewer’s safety, as well as that of the characters.

Carpenter, as he has many times, borrows tone and plot from the original Night of the Living Dead, his first viewing of which must have been a formative moment for him. The possessed miners, a more active version of George Romero’s zombies, are a hoot, especially Richard Cestrone’s awesome and scary Big Daddy Mars.

There are better sci-fi and horror movies, but issues of art and quality aside, there is nothing else like Carpenter’s touch. When he’s at least decent, as with Ghosts of Mars, his films are still a good thing to watch.