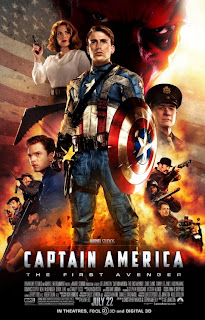 Captain America is a superhero character created by Joe Simon and Jack Kirby. The character first appeared in Captain America Comics #1 (cover dated March 1941), which was published by Timely Comics (the predecessor of Marvel Comics). Over the seven decades of his existence, Captain America has appeared in comic books, a 1944 movie serial, a 1990 film, and live action and animated television series.

Captain America returns to the big screen in Captain America: The First Avenger, the fifth film produced by Marvel Studios (a sister company of Marvel Comics). The film follows the adventures of a young man deemed unfit for military service during World War II who becomes a superhero dedicated to defending America’s ideals.

The story begins in March 1942, a time of momentous events, obviously with World War II being the main event. In Europe, Nazi officer, Johann Schmidt AKA the Red Skull (Hugo Weaving), has stolen a mysterious cube-like tesseract, which he believes will provide the power to make him and his terrorist organization, HYDRA, more powerful that Hitler and the Third Reich. Meanwhile, across the Atlantic in New York City, Brooklyn native, Steve Rogers (Chris Evans), a short, scrawny, sickly young man, is rejected for military service as 4F for the fifth time. Rogers’ best friend, Sgt. James “Bucky” Barnes (Sebastian Stan), tries to comfort him, but Rogers won’t be consoled and is desperate to serve his country.

Rogers’ convictions capture the attention of Dr. Abraham Erskine (Stanley Tucci), an immigrant scientist working for the U.S. government’s Strategic Science Reserve. Erskine’s secret project is a serum that he hopes will create super soldiers, and Erskine wants to test it on Rogers. With the help of military inventor, Howard Stark (Dominic Cooper), Erskine finds success and the serum turns Rogers into a tall, muscular marvel.

After a very public battle with enemy agents, Rogers dons a colorful costume and begins selling War Bonds, but he wants to do more for the good old U.S. of A. While touring Europe, fate gives Rogers a chance to be a hero again and Captain America (Chris Evan) is born. Now, only Captain America and a small band of soldiers can save the world from the Red Skull and HYDRA.

At times, Captain America: The First Avenger is intensely violent, thus its PG-13 rating. Besides that, the film is really a family action adventure that blends the superhero and war movie genres. It cleverly mixes light-hearted, golden nostalgia for Depression and World War II era America with good old two-fisted tales of American fighting men. For the most part, director Joe Johnston seamlessly blends the period film elements with the action set pieces featuring red-bloodied American men kicking evil, Euro-trash ass. In fact, Captain America: The First Avenger reminds me of Johnston’s underrated 1991 Depression-era flick, The Rocketeer (which was also adapted from a comic book).

Although the acting is mostly good, Chris Evans as Steve Rogers and Captain America is the clear standout. Evans is so good that you soon forget the special effects that transform this strapping young actor into the small, frail kid that Steve Rogers is before the super soldier serum turns him into beefcake.

The last third of the film lacks the punch and humor of the first two-thirds. By the end, Captain America’s square-jawed optimism and the film’s gentle humorous tone are replaced by a Captain America that is a fighting machine and by standard action stuff. Still, Captain America: The First Avenger is not really like most superhero movies. It’s a different-looking fantasy action adventure and a fun one, at that.