Half of "The Lincoln Lawyer" Remains Unseen 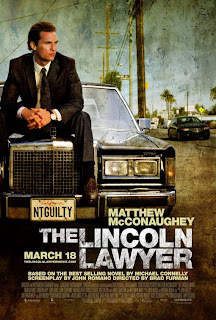 Mickey Haller (Matthew McConaughey) is a criminal defense attorney who operates around Los Angeles County in a Lincoln Town Car, currently driven by his chauffer, Earl (Laurence Mason). Haller has spent his career defending the usual suspects (drug dealers, murderers), but he has just landed the case of his career. Louis Roulet (Ryan Phillippe), a Beverly Hills playboy, has been charged in the brutal beating of a sex worker, Regina Campo (Margarita Levieva). Mickey’s sleazy reputation and Roulet’s tastes for prostitutes, however, only complicate an already difficult case.

I have not read the book upon which The Lincoln Lawyer is based, so I don’t know how close the movie is to novel. Watching this film, I got the idea that screenwriter John Romano and director Brad Furman certainly tried to squeeze as much of the novel as they could into the movie. As good as this film is, a lot of the story seems to be happening offstage or off-camera, in this case. I lost track of how many times, supporting and minor characters ran up to McConaughey’s Mickey Haller and talked about something big they did or found out for him. I kept thinking, “Did I miss something?” It is as if half of the movie takes place out of sight, and only the half with Haller actually happens in front of the audience. That makes many of the film’s twist and turns and sudden revelations seem contrived and arbitrary.

However, I do think that Matthew McConaughey gives a very good, layered, and textured performance, one that makes Haller, who is way too sleazy, an engaging character that you might want to follow around L.A. This is probably the best performance of McConaughey’s career and certainly his best turn as a dramatic actor in a long time. He makes The Lincoln Lawyer worth seeing. He makes a problematic legal thriller something of a thrill to watch.

Posted by Leroy Douresseaux at 12:48 PM