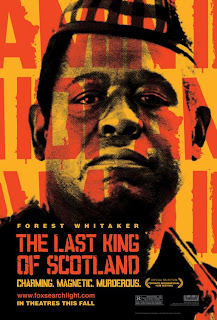 Instead of going into medical practice with his father, Nicholas Garrigan (James McAvoy) heads to Uganda to work at the mission clinic run by a Dr. Merrit (Adam Kotz) and his wife, Sarah (Gillian Anderson). Garrigan has a chance encounter with the newly self-appointed president of Uganda, Idi Amin (Forest Whitaker), who is impressed with Garrigan’s brazen attitude in a moment of crisis. Amin handpicks Garrigan to be his personal physician, and although Garrigan is at first reluctant to take the position, he eventually does and becomes fascinated with Amin. However, before long, Garrigan begins to see just how savage and unstable Amin is, and Garrigan realizes that he’s been complicit in some of Amin’s barbarity. Garrigan is knee deep in trouble, even having an affair with Kay Amin (Kerry Washington), one of Amin’s wives, and he may not be able to get out of the country alive.

Idi Amin, president, dictator, and tyrant of Uganda (1971-79) remains a reviled figure even after his 2003 death while in exile in Saudi Arabia. Director Kevin MacDonald’s The Last King of Scotland is a film dramatization of Amin as seen through the eyes of his personal physician, a young Scotsman.

Forest Whitaker, a thoroughly underrated and under-appreciated actor (at least to general movie audiences) gives the performance of a career in creating a film version of Amin. Think of Whitaker’s breathtaking performance as an actor creating a human monster. From the moment Whitaker’s Amin first appears on screen, as he climbs on an improvised stage to speak to a large crowd of fellow Ugandans, the fearsome power of the actor’s creation radiates from the screen, throbbing with the unpredictable power of a wild storm. Whitaker’s turn as Amin literally transforms The Last King of Scotland into a horror flick. Still for all Amin’s viciousness, Whitaker reveals a complex character, making this as much a study of human nature as it is an indictment of the real Amin.

MacDonald deserves credit on two fronts: for allowing Whitaker to show his up-to-now largely untapped talent and for keeping this movie from being strictly about Whitaker’s Amin. Just as director Ron Howard took Russell Crowe’s great performance and transformed A Beautiful Mind into a compelling and riveting film, so has MacDonald taken Whitaker’s generous performance and made The Last King of Scotland into the kind of thriller than crawls into your belly and then sits on your chest. Of course, a skilled creative staff ably abets MacDonald, especially his costume designer and production designer who both meld earthy, indigenous costumes and sets and ill-placed Western attire together. Cinematographer Anthony Dod Mantle also saturates both rural and urban Uganda in colors that complement the nation’s fertile land.

The usual forgotten person in all the praise for The Last King of Scotland is James McAvoy as Nicholas Garrigan (a fictional character). McAvoy, who played Mr. Tumnus the Faun in The Chronicles of Narnia in 2005, makes Garrigan Amin’s scratching post, and through McAvoy’s superb co-lead role (it’s not really a supporting part), Whitaker gets to strut his stuff. Garrigan mirrors Uganda’s initial excitement and then eventual dread of Amin. McAvoy holds The Last King of Scotland together so Whitaker can give his great performance and MacDonald can make a scary, political thriller about the disintegration of a country that leaves the viewer on edge. That’s worth something.

Posted by Leroy Douresseaux at 9:41 AM