Review: "Star Trek: Generations" Does Not Stray Far from the TV Series 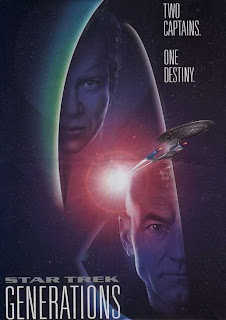 In 1994, the seventh film in the Star Trek movie franchise debuted in theatres, but unlike the previous six films, this one featured a new incarnation of the U.S.S. Enterprise (Enterprise-D) and a new crew, led by Captain Jean-Luc Picard (Patrick Stewart). Star Trek: Generations starred the cast of the second Trek series, “Star Trek: The Next Generation,” which ran for seven seasons from 1987-1994 in syndication.

While investigating a disaster at an outlying observation station, the crew of the Enterprise finds that the catastrophe’s sole survivor is Dr. Tolian Soran (Malcolm McDowell), an intense man insistent that he be allowed to complete his work on the station. Soran turns out to be of the same race as the Enterprise’s bartender, Guinan (Whoopi Goldberg, who did not receive a screen credit in the film), the El Aurian. Soran has malevolent plans for a roaming energy field called The Nexus, which involves the destruction of the Veridian solar system. When Picard tries to intervene, he becomes caught in the Nexus and meets a man presumed-dead the last time a U.S.S. Enterprise (Enterprise-B) tangled with The Nexus, the retired Captain James T. Kirk (William Shatner).

Star Trek: Generations is a good, but not great film, which is the same way one can categorize it as part of the Trek pantheon – good, but not great. Perhaps, it needs to grow on the audience; in fact, I certainly liked it much more the second time I saw it than I did the first. Generations is simply an extended version of the TV show, “Star Trek: The Next Generation” put in the context of a feature film, meaning a longer story, better special effects, and improved production values (even a few scenes of exceptional cinematography).

The acting is more or less the same as in the TV show with a moment here and there of more thoughtful performances. Malcolm McDowell brings a welcome jolt of viciousness as the single-minded Soran. The actors playing the Klingons also bring the same kind of intensity to their performances, as did the actors who played the aliens in the earlier installments of the franchise. Even director David Caruso seems to spring to life when the Klingons are involved.

The best parts of the film are those that take place in the past and involve the only three cast members from the original “Star Trek” television series and films to appear in Star Trek: Generations. Seeing Shatner, Koening, and Doohan made me sad because for all intents and purposes, their Trek can only exist as artifacts from a long time ago.

Posted by Leroy Douresseaux at 1:53 PM