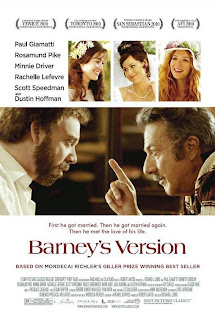 Barney’s Version is a 2010 Canadian film based upon the 1997 novel of the same title by Mordecai Richler. A comedy and drama, Barney’s Version looks at three decades in the life of a picaresque character and his three wives.

Impulsive, irascible, and fearlessly blunt with a foul mouth, Barney Panofsky (Paul Giamatti) is a Jewish Canadian television producer who drinks hard, smokes too many cigars, and is a rabid hockey fan. He owns Totally Unnecessary Productions, which produces a long-running soap opera, “Constable O’Malley of the North.”

At the age of 65, Barney looks back on his life. There is success and wealth, but there are also many mistakes and failures. Underlying his story are three wives: Clara “Chambers” Charnofsky (Rachelle Lefevre), a free-spirit who loves free love (and Barney’s friends); the second wife, Mrs. Panofsky (Minnie Driver), a talkative, self-centered Jewish princess; and Miriam Grant (Rosamund Pike), the love of his life who gives birth to his children. Also part of Barney’s life story is Bernard “Boogie” Moscovitch (Scott Speedman), a drug addict and failed writer who gets Barney in trouble with the law.

Barney’s Version is marked by some good performances, and, in particular, a topnotch lead performance by Paul Giamatti, who won a Golden Globe for his portrayal of Barney Panofsky. Dustin Hoffman, as Barney’s father, Izzy Panofsky, gives one of those robust, fragrant supporting performances that stand out from the other supporting performances. Like many films that make extensive use of flashbacks, however, Barney’s Version ends up looking like an interesting highlight reel rather than a fully developed story that is, in turn, about something or that is built around a solid thematic structure.

I’m not saying that Barney’s Version is not a good movie, but simply that it seems like no more than bits and pieces of a larger story about one of those great fictional characters that grab a hold of our imagination. By the end of Barney’s Version, I thought, “This is good, but there is more. Something is missing.” Still, movie lovers who love character dramas will want to try Barney’s Version.