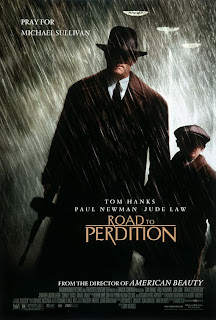 Almost everything about Road to Perdition is superfine, from the beautiful and evocative (to call it haunting seems trite) photography of Conrad L. Hall (for which he posthumously won an Academy Award) to the varied performances of the cast. In a broad sense, the film is about the relationships between men, specifically the father-son relationships that are made by birth or created by the bond of friendship. In a narrow sense, the film is about a boy coming to grips with loving his father despite his revulsion to his father’s profession.

The bonds of loyalty break when Michael Sullivan, Jr. (Tyler Hoechlin) witnesses a gangland killing perpetrated by his father Michael, Sr. (Tom Hanks) and Connor Rooney (Daniel Craig), the only son of his father’s boss. Daddy is a hitman/enforcer for John Rooney (Paul Newman), a mob boss. Connor initiated the brutal killings to cover his trail of deceit against his father. In a half-baked plan to cover himself, Connor kills Sullivan’s wife, Annie (Jennifer Jason Leigh), and younger son, Peter (Liam Aiken), and narrowly misses having Michael Sr. killed. Father and son Michaels take to the road while the elder Sullivan plots his revenge against Connor. That vendetta destroys the father-son relationship the Sr. had with John Rooney. To staunch the blood flow, the Chicago mob hires a talented hit man (Jude Law) to kill Sullivan and son.

Of the many quality elements that stood out in this film, the one that shined the most to me was Tom Hanks’ performance. No longer is he merely an actor, he is an artist: creating, communicating, and storytelling. In a way, his performance becomes symbolic of the character type for which he plays. Sullivan, Sr. isn’t a saint. He is, we must painfully admit, an evil man, who loves nevertheless loves his family and loyalty in that order. When his family is wrecked, his loyalty disintegrates, and all that he has left to love is his boy. Their time “on the run” is time best used to revealing that love to his son. This isn’t the script telling us that; it’s Hanks’ performance told through his facial expressions and in the tenor of his voice. Although the son is the film’s narrator, this is a story about his father and how the son comes to separate the man that is his father from the man who can be a cold, merciless killer.

This is a high quality Hollywood production that doesn’t break the rules. In fact, although Hanks is ostensibly a villain, the filmmakers quietly downplay his wickedness. The script is good, but relies on the audience’s familiarity with father-son relationships, stories about loyalty and betrayal, as well as viewers having an understanding how crime organizations work, at least from a Hollywood point of view. In Road to Perdition, we watch a talented director (Sam Mendes) work his actors (Paul Newman also turns in an excellent pathos-filled performance.) into making the familiar seem special, and that in itself is an accomplishment.

2003 Golden Globes: 1 nomination: “Best Performance by an Actor in a Supporting Role in a Motion Picture” (Paul Newman)

Posted by Leroy Douresseaux at 2:28 PM