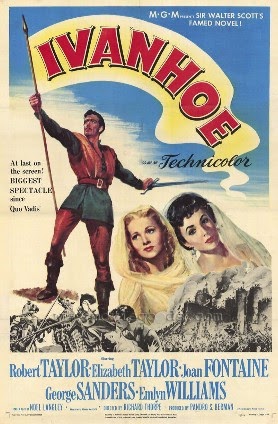 The subject of this movie review is Ivanhoe, a 1952 historical drama and romantic film from director Richard Thorpe.  The film is an adaptation of the novel, Ivanhoe, written by Sir Walter Scott and first published in 1819 (or 1820).  Ivanhoe the film is set in 12th century England and follows a knight who seeks to free the captive King Richard and to restore him to the English throne.

Three writers adapted the novel for the 1952 film, although one of them, Marguerite Roberts, originally did not receive screen credit for her contributions to the screenplay.  After the House on Un-American Activities Committee blacklisted Roberts, MGM apparently received permission from the Screen Writers Guild not to give Robert’s a screen credit in the film, as was her due.

In the film Ivanhoe, medieval chivalry comes to life in wonderful Technicolor.  Returning to England from the Crusades via Europe, Ivanhoe (Robert Taylor) discovers that Richard the Lionhearted (Norman Wooland) is a captive of an Austrian noble.  He hurries back to England only to learn that Richard’s brother Prince John (Guy Rolfe) has assumed the throne as if his brother is dead, and Prince John has no intention of paying the huge ransom the Austrian demands for Richard release.  Ivanhoe returns to his father Sir Cedric (Finlay Currie), a Saxon Lord, who disowned Ivanhoe for joining the Norman Richard in the Crusades.

Spurned again by his father, Ivanhoe seeks help from Isaac of York (Felix Aylmer), the leader of the Jewish people in England, who rallies his people to raise the ransom for Richard.  Meanwhile, Isaac’s daughter Rebecca (Elizabeth Taylor) falls for Ivanhoe, but Rebecca also has a Norman suitor in John’s ally, Sir Brian de Bois-Guilbert (George Sanders).  Eventually, John pits Ivanhoe against Sir Bois-Guilbert in a duel to save Rebecca from being burned at the stake as a witch.

Based upon Sir Walter’s Scott’s novel of the same title, Ivanhoe is a tale of courtly love and Saxon honor.  If you liked The Adventures of Robin Hood with Errol Flynn, you’ll probably like this film, although it isn’t as good as Robin Hood.  It’s an old fashioned romantic adventure with British accents, kooky swordplay, colorful and outlandish theatrical costumes, and an appearance by Locksley (Harold Warrender), otherwise known as Robin Hood.  It’s fun, though too often stiff and dull, but there’s an audience for this.  It received three Oscar® nominations, including one for “Best Picture” and one for its beautiful and soaring romantic score.  People who like films set in “Merry Ole England” will very likely enjoy Ivanhoe, and truthfully, it’s a family safe adventure film for young boys.


Posted by Leroy Douresseaux at 8:48 AM