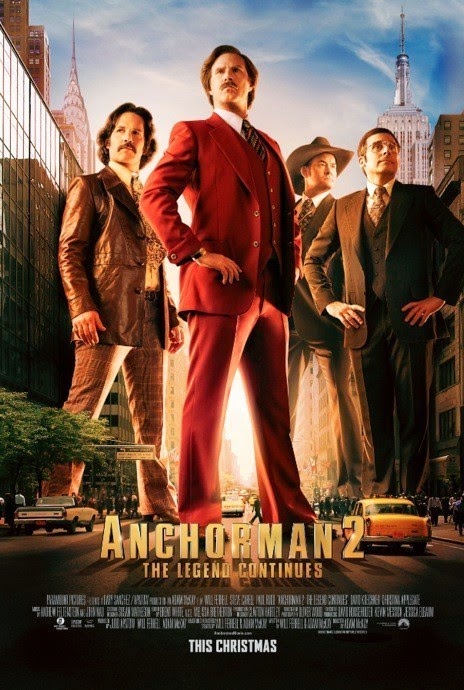 Anchorman 2: The Legend Continues is a 2013 comedy directed by Adam McKay and written by McKay and actor Will Ferrell.  The film is a sequel to Anchorman:  The Legend of Ron Burgundy.  Anchorman 2 finds Ron Burgundy putting the 70s behind him and returning to New York City to take a 24-hour news channel by storm.

Anchorman 2: The Legend Continues begins in New York City where Ron Burgundy (Will Ferrell) and Veronica Corningstone (Christina Applegate) are the husband and wife co-anchors of WBC News.  Then, Veronica is promoted, while Ron is fired.  Ron returns to San Diego, but soon gets an offer to return to NYC.  GNN – Global News Network – is the world’s first 24-hour news network, and they offer Ron a job.

Ron gets to form his own news team, so he reassembles his old gang:  lecherous beat reporter, Brian Fantana (Paul Rudd); Brick Tamland (Steve Carell), the mentally challenged weatherman; and Champ Kind (David Koechner), the chauvinist, racist, and dude-cowboy sports reporter.  Back in NYC, Ron discovers that Veronica has moved on from their relationship, and he struggles to connect with his son, Walter (Judah Nelson).  GNN also proves to be filled with people that don’t like Ron and are determined to keep him from becoming a star in the big city.

However it worked out, having nine years pass between the first Anchorman movie and the sequel, Anchorman 2: The Legend Continues, is a good thing.  If the sequel had been released even as late as five years after the original, I think it would have been too soon.  Nine years later, audiences are again ready for more of the utterly ridiculous antics of Ron Burgundy and his three clownish amigos plus one chick.  Yes, there are new characters, but the sequel is more of the same.

The noticeable difference is that Will Ferrell and Adam McKay gleefully poke fun at and mock cable news networks and the non-news, infotainment media junk food that these networks have elevated to top story status over the last two decades.  This includes car chases, celebrity scandals, missing white girls, and other lurid news.  Without being named, FOX News takes the biggest hits from Anchorman 2.

A lot of Anchorman 2: The Legend Continues made me laugh out loud, but I found that the film was too long at almost two hours of runtime.  I was ready for it to be over, even with all the movie star and celebrity cameos that fill the last act like sparkly roaches.  Do I want more Ron Burgundy?  Ask me in another nine years.

Posted by Leroy Douresseaux at 6:13 AM