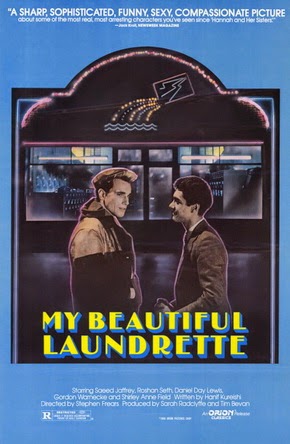 DRAMA/ROMANCE with elements of comedy

The subject of this movie review is My Beautiful Laundrette, a 1985 British comedy-drama directed by Stephen Frears and written by Hanif Kureishi.  The movie, which was originally intended for television, was one of the first films released by Working Title Films.  My Beautiful Laundrette focuses on an ambitious Asian Briton and his white male lover as they strive to find success with a glamorous launderette (Laundromat).

In My Beautiful Laundrette, director Stephen Frears (The Hit) and screenwriter Hanif Kureishi don’t tackle issues, so much as they present a story that involves the entanglement amongst class, economics, family, politics, race, and sex.  My Beautiful Laundrette subtly presents the issues, but presents them nonetheless.  Because the issues of the film tie everyone together, every character is a legitimate player, and the viewer has to always pay attention to all the characters.  That’s heady stuff in a world where the most popular and publicized pictures are glossy films with lots of throwaway appendages.

Omar (Gordon Warnecke) is an ambitious young Asian Briton of Pakistani decent who convinces his uncle to let him manage his uncle’s laundrette.  He convinces Johnny (Daniel Day Lewis, The Bounty), an old school chum and his gay lover, to join him.  They convert the dilapidated business into a colorful and glamorous establishment as they strive for success amidst familial and social politics – Omar’s mostly immigrant family and Johnny’s racist thug friends.

Warnecke and Lewis are excellent as the young businessman who leaps at every opportunity and the disaffected youth at odds with the world respectively.  In this early role, Lewis smolders, as he would so often in the future, showing the audience that there is more, much more, beneath the surface of his character, unseen and real – the window to the character’s soul.  However, the best part belongs to an actor seldom seen in film since My Beautiful Laundrette, Derrick Branche as Omar’s cousin Salim.  Every bit as racist as Johnny’s buddies and as ambitious as any of his relatives, he is the ruthless and blunt looking glass of this story.

My Beautiful Laundrette takes a while to get going, but its documentary approach to storytelling in which the characters are like real people and not actors acting like people is worth the wait.  Much of the love and romance is tepid, probably because the filmmakers wished to convey how difficult love can be amongst people straddling the borders between warring social groups.  Perhaps, the film could have been a bit more emotional, but maybe the filmmakers wanted to play down the passion of love in favor of presenting a broader picture of the societal pressures weighing upon the characters.  The viewer can decide for himself, especially if he likes films that focus on the common everyman.

Posted by Leroy Douresseaux at 9:09 AM