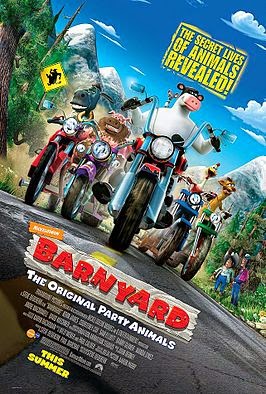 The subject of this movie review is Barnyard, a 2006 computer-animated comedy and family film from writer-director Steve Oedekerk and Paramount Pictures.  The film is also known as Barnyard: The Original Party Animals, and yielded a spin-off animated television series, Back to the Barnyard, in 2007.  Barnyard, which features a group of anthropomorphic animals, focuses on a carefree cow that resists the call that he be the animal in charge of a barnyard.

In a barnyard of walking and talking animals, Otis the Cow (Kevin James) is the party animal.  Otis and his friends: Pip (Jeff Garcia) the mouse, Freddy (Cam Clarke) the ferret, Peck (Rob Paulsen) the rooster, and Pig (Tino Insana) the pig are world-class pranksters out for a laugh.  Otis’ father, Ben (Sam Elliot), however, wants his son to be like him – the cow who makes sure the barnyard runs on all cylinders and the cow who protects the barnyard’s denizens from their common enemy, a pack of coyotes led by the malevolent and conniving Dag (David Koechner).

Otis, who is in a state of perpetual arrested development, is not interested, but when Ben is no longer able to lead and protect, the responsibility falls on Otis.  It’s not an easy fit, and he struggles with the tension between a sense of duty and an urge to run away.  There is, however, a pretty girl cow, Daisy (Courtney Cox) and the crafty Miles the Mule (Danny Glover) who just may give Otis the impetus to take the mantle of leadership.  He’ll need the encouragement because Dag is plotting to make a major attack on the barnyard.

As far as plot and character, Barnyard is mediocre and mildly entertaining.  The animation, however, is quite good.  The characters have a rubbery texture, so they look more like cartoon characters than computer rendered characters.  The story’s setting and environments personify 3-D animation.  Watching this film, it becomes evident that it is indeed taking place in a world of space and depth rather than in the traditional “flat” world of hand drawn animation.  It’s not that any of this looks real; it just doesn’t look flat, so the action looks like actual action.  When characters move, it looks like the figures are really moving.

Barnyard is a pretty and colorful animated feature, which makes up for the average narrative and voice acting.  Only Sam Elliot as Ben, Danny Glover as Miles, and Wanda Sykes as Bessie the Cow give voice performances that come across with any richness.  This is a typical children’s animated feature, filled as it is with funny animal supporting characters that spout line after line of silliness.  Barnyard’s simple story and childish and raucous humor explains why it has long legs at the box office.  It’s actually a family movie that the family can enjoy together.  Barnyard: The Original Party Animals is unashamedly for children.  Still, there are enough risqué gags, bathroom humor, and innuendo to keep teenagers interested and adults chuckling.

Posted by Leroy Douresseaux at 6:09 PM