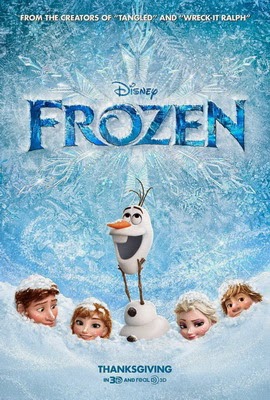 Frozen is a 2013 computer-animated musical, comedy, and fantasy film directed by Chris Buck and Jennifer Lee.  Produced by Walt Disney Animation Studios, Frozen was released theatrically in 3D.  Frozen is based on Hans Christian Andersen’s fairy tale, “The Snow Queen,” which was first published in 1844.  Frozen focuses on a young woman trying to break the curse of eternal winter, a curse started by the Snow Queen, who is her sister.

In the kingdom of Arendelle, the King and Queen have two daughters.  The older sister, Elsa, has the magical ability to create ice and snow.  The younger daughter, Anna, accidentally becomes a victim of her older sister’s power, causing a rift between the two formerly close siblings.  Years later, Elsa (Idina Menzel), is about to be crowned Queen of Arendelle.  Anna (Kristin Bell) is excited about her sister’s coronation, which will open the castle to the outside world for the first time in years.  At the coronation, a dispute between the sisters leads to Elsa loosing control of her now immense powers.  She inadvertently puts Arendelle in a deep freeze, before running away.

Anna is determined to find Elsa, now known as the “Snow Queen,” and to reconcile their relationship.  She befriends Kristoff (Jonathan Groff), a mountain man, and his reindeer, Sven, who decide to help her find the reclusive Elsa.  They are eventually joined by Olaf (Josh Gad), a joyous snowman.  Their journey is epic, but if Anna cannot reach Elsa, Arendelle will be cursed to suffer an eternal winter.

Frozen is one of the truly great animated films from Walt Disney Pictures.  It is the first computer-animated film from Walt Disney Animation Studios that is artistically and technically equal to the best computer-animated films from Pixar Animation Studios (now a subsidiary of The Walt Disney Company).  In fact, Pixar’s John Lasseter was an executive producer on and a guiding hand behind Frozen.  Everything fantastic, wonderful, magical, joyous, and poignant that people expect of the best Disney and Pixar films is more than plentiful in Frozen, one of the finest films of 2013.

The voice cast, top to bottom, is excellent.  Honestly, every voice performance seems to be superb.  Kristin Bell and Idina Menzel give bravura performances individually and together; they have the kind of screen chemistry of which many casts can only dream of having.  Of course, Menzel is a standout singing Frozen’s signature song, the Oscar-winning “Let It Go.”  Josh Gad is scene-stealing gold as the comic-relief snowman, Olaf.  I have to admit that I’d like to see Olaf again.

Frozen’s song and musical score also make it the best Disney animated musical film since The Little Mermaid, Beauty and the Beast, and Aladdin.  Kristen Anderson-Lopez and Robert Lopez’s songs for Frozen recall both the Broadway-styled numbers in Beauty and the Beast and the comic fantasy tunes of Aladdin.

Once upon a time, Walt Disney’s animated films were called “instant classics;” Frozen is an instant classic.  Also, the resolution of Elsa and Anna’s relationship separates Frozen from Disney’s other female-centric animated features.  For me, Frozen is now a personal favorite that I plan to watch repeatedly.

Posted by Leroy Douresseaux at 1:21 PM