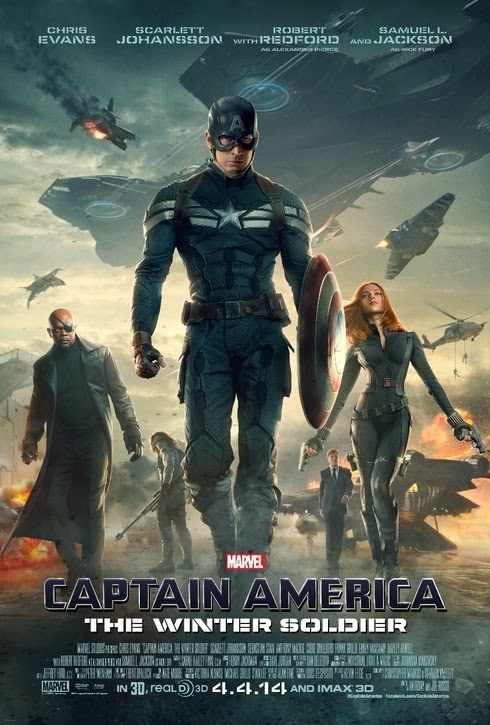 Captain America: The Winter Soldier opens two years after the events of The Avengers.  Steve Rogers (Chris Evans) lives in Washington D.C. and continues to work as Captain America (Chris Evans) for the espionage agency, S.H.I.E.L.D.  As a man of the 1930s and 40s, however, Rogers struggles to adapt to contemporary society.

He also has misgivings about S.H.I.E.L.D.’s recent activities.  After a rescue operation, Rogers comes into conflict with Nick Fury (Samuel L. Jackson), the director of S.H.I.E.L.D., but soon finds that he and Fury have problems in common.  They are facing off with a mysterious assassin known as The Winter Solider (Sebastian Stan), and he seems to be every bit as powerful and as skilled as Captain America.

To stop him, Captain America joins forces with Natasha Romanoff a/k/a The Black Widow (Scartlett Johansson).  When things get too hot even for the two of them, they find a friend in ex-paratrooper Sam Wilson (Anthony Mackie), who possesses a winged-flight exoskeleton called “Falcon.”  Still, that may not be enough to stop a conspiracy which has its tentacles everywhere.

While Captain America: The First Avenger is as much a World War II fantasy adventure film as it is a superhero movie, Captain America: The Winter Soldier is a superhero movie that acts like an installment of the Mission: Impossible franchise, with some Jason Bourne thrown in for good measure.  And I like it.  The Winter Soldier is funny, awe-inspiring, thrilling, edge-of-your-seat, and riveting.  It is a big movie packed with the kind of CGI that makes you think everything on the screen is real.  It was hard for me to look away from the screen because this is the kind of movie that really grabs hold of your attention at the start of the story and won’t let go even at the end.

Captain America: The Winter Soldier is also a character drama and political thriller that examines the lead characters’ lives in the context of the modern geopolitical climate and state-security apparatus.  In one way or another, Steve Rogers, Natasha Romanoff, and Nick Fury are basically out of step with either the times (Rogers) or their place in national and international politics and intrigue (Romanoff and Fury).  The film asks the questions:  how much are their lives tied to their jobs and what are they willing to do to achieve righteousness?  They are forced to confront what they both want and believe the truth to be and what it may actually be.  To that end, Chris Evans, Samuel L. Jackson, and Scartlett Johansson give some of the best performances seen in superhero movies over the past twenty-five years.  I don’t want to spoil the movie, but I will say that this film’s other actors, especially Robert Redford, are also good.

Posted by Leroy Douresseaux at 8:09 AM