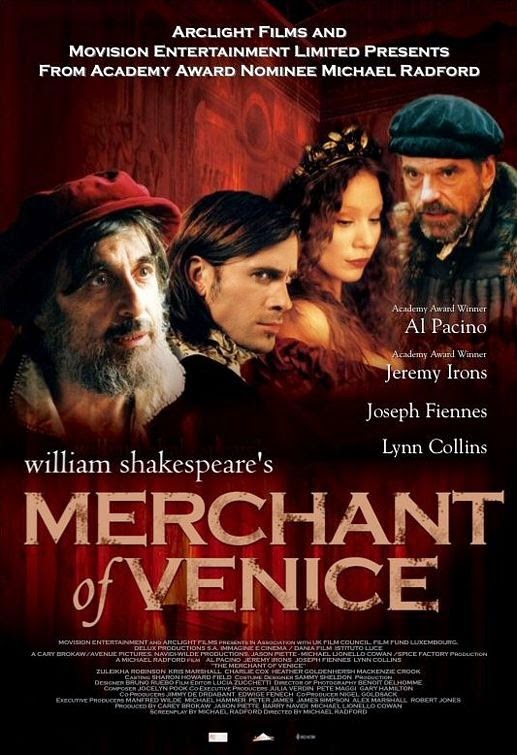 William Shakespeare is once again brought to the screen, this time in The Merchant of Venice, another film adaptation of his play about passion, justice, and anti-Semitism.  Set in late 16th century Venice, the story finds Bassanio (Joseph Fiennes) lacking money to woo an heiress, Portia of Belmont (Lynn Collins), because his lavish lifestyle has left him deeply in debt.  So he turns to his merchant friend, Antonio (Jeremy Irons), for the money.  Antonio, however, has his cash tied up in ships and overseas trade, so he secures a loan of 3,000 ducats from Shylock (Al Pacino), a Jew.

In Venice, Jews cannot own property, and they are forced to live in a “geto” (a walled-off section of the city), having only limited access to the city.  Antonio has publicly abused Shylock and other Jews for the practice of usury – money lending.  Spiteful and bitter, Shylock is glad to have Antonio in his debt.  In order to secure the money he wants to give Bassanio, Antonio promises that if he defaults on the loan, he’ll pay Shylock with a pound of flesh – literally.

Bassanio leaves with his friend Gratanio (Kris Marshall) to woo his love, but finds that Portia and her lady-in-waiting, Nerissa (Heather Goldenhersh), have been entertaining other suitors.  Like them, Bassanio must engage in a game of chance (blindly choosing which of three caskets holds the prize that earns Portia’s hand).  However, Jessica (Zuleikha Robinson), Shylock’s daughter, elopes with Bassanio’s friend, Lorenzo (Charlie Cox), and takes a large amount of her father’s personal wealth with her.  Wounded to his very soul, Shylock focuses on Antonio’s debt to him, and when Antonio does default on the loan, Shylock demands his pound of flesh.

I’ve never seen a previous film version of Shakespeare’s The Merchant of Venice (such as the 1973 version starring Laurence Olivier), and I’m only familiar with the text in passing, having never read the entire work.  Thus, I can only judge this film on its contents or merits.  Michael Radford’s version is a somber narrative with occasional explosions of passionate arguments about prejudice, bigotry, and discriminations, and only a few moments of genuinely harmonious scenes of romantic love.  Despite a diverse range of elegant and sumptuous costumes (for which costume designer Sammy Sheldon earned a 2005 BAFTA Award nomination), evocative sets, and stunning locales set on sunny isles (Venice, Italy), Radford’s film is marred by mumbled dialogue, dour characters, and an air of mean-spiritedness that permeates even the most pleasant moments.

The performances are adequate for transforming Shakespeare to the screen, but only Pacino gives a memorable performance as the righteous and wronged Shylock.  If you, dear reader, need to cheat for an English lit class, Cliff Notes would be better than this.  The film merits as a visual treat, but limps as a narrative.

Posted by Leroy Douresseaux at 2:05 PM