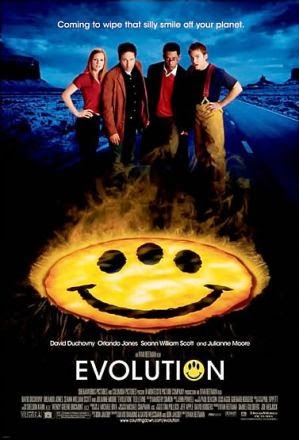 The subject of this movie review is Evolution, a 2001 science fiction comedy from director Ivan Reitman.  The film follows four people who are fighting an alien organism that has been rapidly evolving into outlandish creatures ever since its arrival on Earth inside a meteor.

Evolution makes me think of Ghostbusters (the former was released 17 years to the date of the latter’s release).  Maybe, that’s because both films share the same director, Ivan Reitman, and maybe because both films seem to have the same ebb and flow.  While the latter pretty much realized its promise of being a very funny and popular film, the former pretty much failed on both counts.

Dr. Ira Kane (David Duchovny), a biology teacher (and disgraced government employee), and his colleague Harry Block (Orlando Jones) see fame and fortune when firefighter cadet Wayne Grey (Seann William Scott) alerts them to a meteorite that recently crashed into a local cave.  The meteorite emits a bluish fluid, and Dr Kane and Prof. Block are shocked to discover that the fluid contains many single-cell organisms that are evolving before their very eyes.  The alien life forms evolve and adapt at such an incredible rate (into countless wonderful animal-like forms) that they threaten to prove Charles Darwin right – the strongest will survive and they will take over the world.  When the military suddenly arrives, they only make matters worse.  Of course, it’s up to Kane, Block, Grey, and sexy government scientist Dr. Allison Reed (Julianne Moore) to save the world from the fate of this alien evolution.

This film has two things going for it, the comedic performances of the actors and the special effects.  Reitman, a veteran of many excellent funny movies, leans on the latter for his new film.  Whereas Ghostbusters used SFX in service of a great cast of funnymen, Evolution seems enthralled by the CGI technology that didn’t exist at the time of Ghostbusters.  Weird animal aliens fun amok in this film, some resembling dinosaurs and wild animals, others resembling slugs and worms.  I was impressed by the visual finesse of the special effects, but I’d hoped that the movie would be funnier, but it only managed to be lukewarm.

The cast only manages to be really on their game for about half of the film’s running time.  Seann William Scott and Orlando Jones are seemingly inspired, but Reitman doesn’t really let them reach the heights of which they are capable.  Duchovny plays it a bit too cool, but at times he is bursting at the seams to really let his funny side loose.  Ms. Moore is almost reduced to being the pretty female attachment, which is an utter waste when one considers are tremendous acting talent.  Maybe, she isn’t a comedic actress, but she can do more than just be the female costar.

Occasionally intriguing, sometimes pleasant, and infrequently exciting, Evolution is sadly another mediocre film that only lazily aimed at being special.  The filmmakers either didn’t put in the work required to make this film really good, or despite their best efforts, they assembled enough defective parts to ruin what could have been a good film.


Posted by Leroy Douresseaux at 8:16 AM