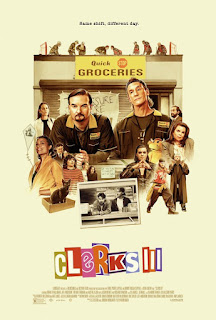 TRASH IN MY EYE No. 75 of 2022 (No. 1887) by Leroy Douresseaux
Clerks III (2022)
Running time:  100 minutes (1 hour, 40 minutes)
MPA – R for pervasive language, crude sexual material, and drug content
WRITER/DIRECTOR:  Kevin Smith
PRODUCERS:  Liz Destro and Jordan Monsanto
CINEMATOGRAPHER:  Learan Kahanov
EDITOR: Kevin Smith
COMPOSER: James L. Venable
COMEDY/DRAMA
Starring:  Brian O’Halloran, Jeff Anderson, Rosario Dawson, Jason Mewes, Kevin Smith, Trevor Fehrman, Austin Zajur, Ben Affleck, and Danny Trejo
Clerks III is a 2022 comedy-drama film from writer-director Kevin Smith.  It is the third entry in the Clerks film series.  Clerks III is also a sequel to Clerks (1994) and Clerks II (2006) and is a direct sequel to the latter.  Clerks III finds two friends and convenience store co-owners at a crossroads after one of them has a near-fatal heart attack.
Clerks III opens at “Quick Stop Groceries.”  This is the convenience story where best friends, Dante Hicks (Brian O’Halloran) and Randal Graves (Jeff Anderson), work side by side as co-owners of the store where they were once employees.  Vagrant drug dealers, Jay (Jason Mewes) and Silent Bob (Kevin Smith), who used to hangout in front of the store are now also business owners.  They have transformed the business space next door that was once occupied by “RST Video” into a legal marijuana dispensary.
Otherwise, their lives have remained the same, except for a tragedy that occurred in Dante's life.  One day, store employee, Elias (Trevor Fehrman), and his friend, Blockchain (Austin Zajur), are visiting when Randal suffers a heart attack (the type known as “the widow-maker”).  After surviving, Randal decides that he has wasted his life and, looking for a new purpose, decides to make a movie about his life at the convenience store.  In his maniacal focus to get his movie made, however, Randal seems to have forgotten how much a part of his life Dante has been – with tragic results.
Kevin Smith's filmography is filled with surprising movies, like Chasing Amy; interesting, uneven flicks, like Dogma; and interesting bad films, like Mallrats.  Clerks, the film that made him something of a star, and its sequel, Clerks II, are my favorite Kevin Smith movies, and I consider them great films.
Clerks III is not great, and it is surprising to me in the fact that it is an uneven film that is at times bad and at times interesting.  In the first hour, the story meanders so much that Clerks III is practically unwatchable.  At about the 70-minute mark, however, the film has a late inciting incident that changes the tone and essentially saves the film.
I have to admit that I find that Brian O’Halloran, Jeff Anderson, and Kevin Smith have not aged well.  They not only look old, but they also look as if they have had hard lives or lives filled with substance abuse.  Jason Mewes (Jay) has aged well, and I believe that he has actually had issues with substance abuse.  Truthfully, a lot of the returning cast looks old and run down.
Clerks III seems like a love letter to Clerks, which started it all – Kevin Smith's career as a filmmaker and celebrity and Clerks as a media franchise.  [There was a “Clerks” animated series, which aired for six episodes on ABC in 2000 and on Comedy Central in 2002, and a comic book miniseries originally published by Oni Press in the late 1990s.]  Clerks III is also Smith's nod to the part of his earlier life that inspired Clerks.  That's nice, but I would only recommend Clerks III to Kevin Smith fans.  Everyone else should avoid this convenience store.  The grades I am giving this film are an acknowledgment that I like the earlier films and don't really indicate how mediocre I think Clerks III is.
5 of 10
C+
★★½ out of 4 stars
Thursday, December 15, 2022
The text is copyright © 2022 Leroy Douresseaux. All Rights Reserved. Contact this blog or site for reprint and syndication rights and fees.
-----------------------------
------------------------------
Amazon wants me to inform you that the affiliate link below is a PAID AD, but I technically only get paid (eventually) if you click on the affiliate link below AND buy something(s).
Posted by Leroy Douresseaux at 2:25 PM