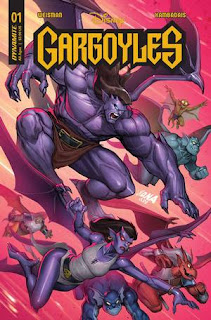 DISNEY'S GARGOYLES #1
DYNAMITE ENTERTAINMENT
STORY: Greg Weisman
ARTIST: George Kambadais
COLORS: George Kambadais
LETTERS: Jeff Eckleberry
EDITOR: Nate Cosby
COVER: David Nakayama
32pp, Color, $3.99 U.S. (December 2022)
Rated “Teen”
“Here in Manhattan” – Chapter One: “A Little Crazy”
“Gargoyles” was an animated television series produced by Walt Disney Television Animation that ran for a total of 78 episodes over three seasons, from October 24, 1994, to February 15, 1997.  The series focused on “gargoyles,” a species of nocturnal creatures that had spent a thousand years in an enchanted petrified state.  Reawakened in modern New York City, they are stone by day, but when day falls, they are warriors, the city's night-time protectors.
“Gargoyles” has been adapted into comic books by both Marvel Comics (1995) and Slave Labor Graphics (2006-09).  Dynamite Entertainment is the new license holder and begins its publication with Gargoyles Volume 1.  The series is written by “Gargoyles” creator Greg Weisman; drawn and colored by George Kambadais; and lettered by Jeff Eckleberry.  The series will act as a “Season 4” of the original television series, following Weisman's preferred story line.
Gargoyles Volume 1, #1 (“A Little Crazy”) opens at night in Manhattan.  Elisa Maza, an NYPD detective from the twenty-third precinct, is in on the action as the Gargoyles do what they always do – at night.  However, a gang war is brewing, and it may be worse than the previous one.  Meanwhile, deep underground in the “Labyrinth,” something momentous is about to happen.
THE LOWDOWN:  Since July 2021, Dynamite Entertainment's marketing department has been providing me with PDF review copies of some of their titles.  One of them is Gargoyles #1, the first Gargoyles comic book that I have read.
Although I was aware of the “Gargoyles” animated series, I never got around to watching it, but I do remember that it had a substantial fandom.  I was aware of Slave Labor Graphics' comic book series, but unaware of Marvel's series – neither of which I read.
I am aware of Greg Weisman's work in animation.  I have really enjoyed some of the comic books that he has written.  He wrote the majority of comic book series that adapted the first “Young Justice” (2010-13) animated series.  I also really enjoyed his Star Wars comic book, Star Wars: Kanan (2010) for Marvel Comics, which focused on one of the main characters from the Disney animated series, “Star Wars Rebels (2010-2014).
I like Weisman's set-up for this first issue of Gargoyles.  Weisman uses this first issue to acquaint readers with the franchise's characters, although many people reading this first issue are already in the know.  He ends this first issue with a last act filled with intriguing sub-plots.
I also immensely enjoyed artist George Kambadais' art on Dynamite's recent John Carter of Mars miniseries.  The dynamic illustrations and shimmering colors he brought to John Carter, Kambadais transports to Gargoyles.  Gargoyles #1 looks good, and the lettering by Jeff Eckleberry makes the story pop and gives the dialogue some edginess.
I think the second issue of Gargoyles is where the story will really kick into gear, but Gargoyles #1 is a good start.  Hopefully, this series, which will act as a Season Four (I think) of the original animated TV series, will please fans, new and old.
I READS YOU RECOMMENDS:  Fans of the Gargoyles franchise will want to try Dynamite's new Gargoyles comic book series.
A-
Reviewed by Leroy Douresseaux a.k.a. "I Reads You"
https://twitter.com/DynamiteComics
https://www.dynamite.com/htmlfiles/
https://www.facebook.com/DynamiteComics/
https://www.youtube.com/channel/UCNOH4PEsl8dyZ2Tj7XUlY7w
https://www.linkedin.com/company/dynamite-entertainment
The text is copyright © 2022 Leroy Douresseaux. All Rights Reserved. Contact this blog or site for syndication rights and fees.
-----------------------
Amazon wants me to inform you that the affiliate link below is a PAID AD, but I technically only get paid (eventually) if you click on the affiliate link below AND buy something(s).
Posted by Leroy Douresseaux at 2:13 PM