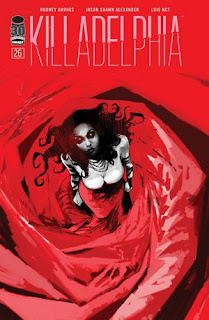 KILLADELPHIA #26
IMAGE COMICS
STORY: Rodney Barnes
LAYOUTS: Jason Shawn Alexander
PENCILS: Germán Erramouspe
INKS: Jason Shawn Alexander
COLORS: Lee Loughridge
LETTERS: Marshall Dillon
EDITOR: Greg Tumbarello
COVER: Jason Shawn Alexander
VARIANT COVER ARTISTS: Jason Shawn Alexander (Spawn variant); Chris Visions
32pp, Colors, 3.99 U.S. (December 2022)
Rated “M/ Mature”
Killadelphia created by Rodney Barnes and Jason Shawn Alexander
“There's No Place Like Home” Part II: “No Woman, No Cry”
Killadelphia is an apocalyptic vampire and dark fantasy comic book series from writer Rodney Barnes and artist Jason Shawn Alexander.  Published by Image Comics, it centers on a conspiracy in which vampires attempt to rule Philadelphia.  The series is currently written by Barnes and drawn by Alexander and Germán Erramouspe.  Colorist Lee Loughridge and letterer Marshall Dillon complete Killadelphia's creative team.
Killadelphia focuses on James “Jim” Sangster, Jr. and his father, revered Philadelphia homicide detective, James Sangster, Sr., a vampire!  Father and son lead a ragtag team comprised of a medical examiner (Jose Padilla), werewolves, a witch, and a rebellious, but special young vampire (Tevin Thompkins a.k.a. “See Saw”) in a bid to save Philly.  Their adversary is a former First Lady, the vampire Abigail Adams.
As Killadelphia #26 (“No Woman, No Cry”) opens, Anasi the Spider-God parlays with gods from many pantheons.  How many can he convince that one of the four great demon lords, Corson, is preparing to conquer all the realms?  Can he convince them of Corson's plot?  Will they even give a f**k?
At the same time, Abigail Adams, who started the vampire fire, remembers her past:  her childhood, how she meet John Adams, and how they became vampires.  Meanwhile, after having killed a Sangster, General Toussaint Louverture and his Haitian army of monsters continue to slay vampires.  And the General has his sights on another big prize … in the name of God, of course.
THE LOWDOWN:  We are at the second chapter of Killadelphia's fifth story arc, “There's No Place Like Home.”  Before this arc debuted, creators Rodney Barnes and Jason Shawn Alexander warned readers that they were not prepared for what was coming in the arc.
I doubted.  I mean I didn't doubt as hard as the Apostle Thomas.  However, I believed that because I had been reading Killadelphia from the beginning, I had seen so much...  So what could they possibly do that I would not expect?  What could I see?
New pencil artist Germán Erramouspe and colorist Lee Loughridge have joined a creative team that continues to produces the “world's greatest vampire comics magazine.”  Long time readers are being rewarded for sticking around, but I can say that those who have not yet joined should get started now so that they can eventually get current.  Killadelphia just slays me.
So, yes, I have seen the previously unseen.  I am seeing things … for which I was not prepared, as I was warned.  I believe, and I am still not prepared for what is to come.
NOTE: Killadelphia #26 is also available in a “Noir Edition,” featuring black-and-white line art interiors.
I READS YOU RECOMMENDS:  Fans of vampire comic books and of exceptional dark fantasy will want Killadelphia.
A+
Reviewed by Leroy Douresseaux a.k.a. "I Reads You"
https://twitter.com/TheRodneyBarnes
https://twitter.com/jasonshawnalex
https://twitter.com/MarshallDillon
https://twitter.com/ImageComics
https://imagecomics.com/
http://rodneybarnes.com/
https://www.instagram.com/imagecomics/
https://www.facebook.com/pages/Image-Comics-Inc/178643148813259
https://www.twitch.tv/imagecomics
https://www.youtube.com/channel/UCHmaKLo0FXWIPx-3n6qs3vQ
https://www.linkedin.com/company/image-comics/
The text is copyright © 2022 Leroy Douresseaux. All Rights Reserved. Contact this blog or site for reprint and syndication rights and fees.
--------------------------
Amazon wants me to inform you that the affiliate link below is a PAID AD, but I technically only get paid (eventually) if you click on the affiliate link below AND buy something(s).
Posted by Leroy Douresseaux at 3:53 AM