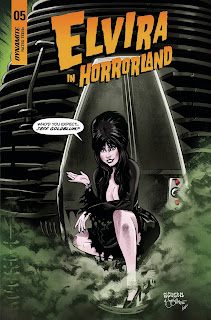 ELVIRA IN HORRORLAND VOLUME 1 #5
DYNAMITE ENTERTAINMENT
STORY: David Avallone
ART: Silvia Califano
COLORS: Walter Pereya
LETTERS: Taylor Esposito
EDITOR: Joseph Rybandt
COVER: Dave Acosta and Jason Moore
32pp, Color, $3.99 U.S. (December 2022)
Rated Teen+
Chapter Five: “Fly Me to the Moon”
In 1981, actress and model Cassandra Peterson created the “horror hostess character,” known as “Elvira.”  Elvira gradually grew in popularity and eventually became a brand name.  As Elvira, Peterson endorsed many products and became a pitch-woman, appearing in numerous television commercials throughout the 1980s.
Elvira also appeared in comic books, beginning in 1986 with the short-lived series from DC Comics, Elvira's House of Mystery.  In 2018, Elvira returned to comic books via Dynamite Entertainment.  Elvira's latest comic book series is Elvira in Horrorland Volume 1.  The series is written by David Avallone; drawn by Silvia Califano; colored by Walter Pereyra; and lettered by Taylor Esposito.  The series finds Elvira trapped in the Multiverse of Movies (a bunch of “pocket dimensions” created by the existence of movies) with only the illusive “Remote Control of Federico Fellini” capable of returning her home.
Elvira in Horrorland Volume 1 #5 (“Fly Me to the Moon”) opens in a new world.  Elvira lands in the cinematic world of filmmaker, Daniel Chernabog.  First up for the Mistress of the Dark is the horror flick starring two unreasonably tall people, “The Mumblefly.”  Now she faces off against telepods, Brundleflies, scanners, videodromes, talking cockroaches, bug powder … and a static-y hand that emerges from a television screen.  Is this the final leg of Elvira's journey?  Will the remote finally work correctly for her?  Or will she merely be left with a naked lunch?
THE LOWDOWN:  Since July 2021, Dynamite Entertainment's marketing department has been providing me with PDF review copies of some of their titles.  One of them is Elvira in Horrorland Volume 1 #5, one of many Dynamite/David Avallone Elvira comic books that I have read and enjoyed.
“Fly Me to the Moon” skewers the films of the renowned Canadian filmmaker and writer-director, David Cronenberg, who is one of my favorite film directors.  Writer David Avallone spoofs Cronenberg as “Daniel Chernabog” and references a number of Cronenberg's films, including Scanners (1981), Dead Ringers (1988), and Naked Lunch (1992).  The ones that get the most pounding are two of Cronenberg's most memorable and notorious films, Videodrome (1983) and The Fly (1986), which is a remake of classic 20th Century Fox sci-fi/horror film, The Fly (1958).
Avallone gleefully lampoons Videodrome's acclaimed actor turned pariah, James Woods.  Avallone also has fun with his spoof versions of the stars of The Fly, Jeff Goldblum and Geena Davis, and he captures the strangeness of them as leads in the same film.  I believe that if Cronenberg's The Fly were made today, the studio would not allow two offbeat types like Goldblum and Davis to be cast – maybe one, but not both.  [They'd likely cast British or Australian waifs with generic American accents.]
Elvira in Horrorland artist Silvia Califano certainly captures the general wackiness of the actors who star in Cronenberg's films.  Califano produces a perfectly creepy cartoon version of James Woods, and that alone is worthy of an award from some comics organization.
Elvira in Horrorland is fun and full of puns and proves that even the best filmmakers are ripe for some deflating of filmography … if not also of reputation.  Avallone and Califano also prove once again that if you can't get Elvira live, you can get her as a perfect comic book character.
I READS YOU RECOMMENDS:  Fans of Elvira and of David Avallone's Elvira comic books will want to read Elvira in Horrorland Volume 1.
A
Reviewed by Leroy Douresseaux a.k.a. "I Reads You"
https://twitter.com/DAvallone
https://twitter.com/DynamiteComics
https://www.dynamite.com/htmlfiles/
https://www.facebook.com/DynamiteComics/
https://www.youtube.com/channel/UCNOH4PEsl8dyZ2Tj7XUlY7w
https://www.linkedin.com/company/dynamite-entertainment
The text is copyright © 2022 Leroy Douresseaux. All Rights Reserved. Contact this blog or site for reprint and syndication rights and fees.
------------------------------
Amazon wants me to inform you that the affiliate link below is a PAID AD, but I technically only get paid (eventually) if you click on the affiliate link below AND buy something(s).
Posted by Leroy Douresseaux at 1:04 PM