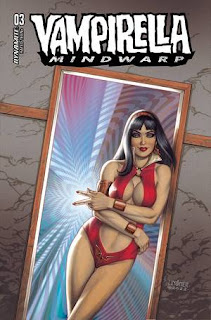 VAMPIRELLA MINDWARP VOLUME 1 #3
DYNAMITE ENTERTAINMENT
STORY: Jeff Parker
ART: Benjamin Dewey
COLORS: Dearbhla Kelly
LETTERS: Jeff Eckleberry
EDITOR: Nate Cosby
COVER: Joseph Michael Linsner
32pp, Color, $3.99 U.S. (November 2022)
Rated Teen+
“The Feast”
Vampirella is a vampire and female superhero created by the late author and science fiction and horror expert, Forrest J Ackerman, and designed by comic book artist, Trina Robbins.  Vampirella first appeared in Vampirella #1 (Sept. 1969), the debut issue of a black and white horror comics magazine from Warren Publishing.  Writer-editor Archie Goodwin changed the character from a hostess of horror comics to a leading character in her own stories.
In 2010, Dynamite Entertainment obtained the character and has been publishing new Vampirella material since then.  The latest is Vampirella Mindwarp Volume 1.  This new series is written by Jeff Parker; drawn by Benjamin Dewey; colored by Dearbhla Kelly; and lettered by Jeff Eckleberry.  The series follows a mad chase across time and space, as an aged sorceress tries to steal and inhabit Vampirella's body.
Vampirella Mindwarp Volume 1 #3 (“The Feast”) opens in 1969... because Baroness Liesel Gruzal attempted to possess Vampirella's body.  The result was that Vampirella and the Baroness have been projected back into their bodies in the past.  Now, Vampirella finds herself in the middle of a battle with Baron Vadim Gruzal, the Baroness' husband.  Strange battles can yield strange bedfellows.
But what is the Baroness really up to?  Vampirella and Ren, now in the body of Pendragon the Great, a popular magician of the 1930s and Vampirella's friend, have new allies: Adam Van Helsing and Ravashi, the young woman who is a mystic.  They have tracked the Baroness to Bavaria, but can they get to her before Vampirella's enemies get to them?
THE LOWDOWN:  Since July 2021, Dynamite Entertainment's marketing department has been providing me with PDF review copies of some of their titles.  One of them is Vampirella Mindwarp Volume 1 #3, which is one of many Dynamite Vampirella comic books I have read.
Vampirella Mindwarp #1 surprised me.  Writer Jeff Parker has made sure that the following issues are living up to that great opening chapter.  Vampirella works best when she is surrounded by a stellar cast of supporting characters, and Parker has created a sterling group:  the good, the bad, and the Vampirella.  They make this story worth following back in time.
Benjamin Dewey's art is simply fantastic.  The plot, the settings, the characters, the moods, the atmosphere:  Dewey brings it all to life with a pop art sensibility that makes Mindwarp more than just another Vampirella comic book.  His storytelling makes Vampirella: Mindwarp one of the best fantasy comic book series around – humorous, delightful, and mystical.  Dearbhla Kelly's colors continue to make the pop art pop off the page, and Jeff Eckleberry's letters capture the crazy rhythm of this story.
Vampirella: Mindwarp #3 is a really good third issue, and it has an ending that will make me return for more.  You should, also, dear readers.
I READS YOU RECOMMENDS:  Fans of Vampirella comics will want to read Vampirella Mindwarp Volume 1.
A
Reviewed by Leroy Douresseaux a.k.a. "I Reads You"
https://twitter.com/DynamiteComics
https://www.dynamite.com/htmlfiles/
https://www.facebook.com/DynamiteComics/
https://www.youtube.com/channel/UCNOH4PEsl8dyZ2Tj7XUlY7w
https://www.linkedin.com/company/dynamite-entertainment
The text is copyright © 2022 Leroy Douresseaux. All Rights Reserved. Contact this blog or site for reprint and syndication rights and fees.
------------------------
Posted by Leroy Douresseaux at 2:35 PM