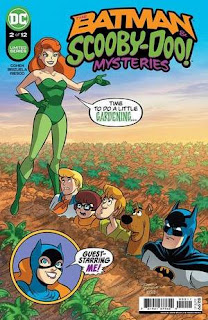 THE BATMAN & SCOOBY-DOO MYSTERIES (2022) #2
DC COMICS
STORY: Ivan Cohen
ART: Dario Brizuela
COLORS: Franco Riesco with Carrie Strachan
LETTERS: Saida Temofonte
EDITORS: Kristy Quinn
COVER: Dario Brizuela with Franco Riesco
32pp, Color, $2.99 U.S. (January 2023)
Ages 8+
Batman created by Bob Kane with Bill Finger
“Rash Decisions”
The Batman & Scooby-Doo Mysteries was a 12-issue comic book limited series that DC Comics published in 2021 and 2022.  The series brought the characters from both the Scooby-Doo, Where Are You? and Batman comic book series together.  Over the past five decades, Scooby-Doo and friends have joined Batman and (often) Robin to solve mysteries in various animated television series and comic books.
The Batman & Scooby-Doo Mysteries sold well enough that DC Comics began a second series in October 2022.  I did not subscribe to the first series, but I did subscribe to the new one.  I will try to review each issue for you, dear readers, although some kind of glitch has kept me from receiving the first issue, so...
The Batman & Scooby-Doo Mysteries #2 (“Rash Decisions”) is written by Ivan Cohen; drawn by Dario Brizuela; colored Franco Riesco; and lettered by Saida Temofonte.  This issue guest-stars Batgirl/Barbara Gordon and Poison Ivy.
The Batman & Scooby-Doo Mysteries #2 opens in front of the Gotham Police Department.  Mystery Inc.:  Scooby-Doo, Shaggy, Fred, Daphne, and Velma is meeting with Police Commissioner Jim Gordon.  When Batman finally arrives, the group heads to the police charity ball.  Just as the event is beginning, the commemorative corsages arrive and start spewing a green mist that causes an allergic reaction.  Soon, all the police officers present are beset by an itchy rash.
Even Barbara Gordon is affected, so Batman asks Daphne to take her home.  Soon, Daphne finds herself inside “the Clock Tower,” from where Barbara keeps her eyes and ears on Gotham City.  It is also the occasional home of Batgirl.  And considering her condition, Barbara asks Daphne to assume her identity as “Batgirl!”  Will this bit of high-stakes cosplay turn out to be a rash decision?
THE LOWDOWN:  As a child, the most important characters in my life were Batman and Robin and Scooby-Doo and company (and also Josie and the Pussycats).  Two of my all-time favorite animated television episodes are the team-ups of Batman and Scooby-Doo in two Season One episodes of “The New Scooby-Doo Mysteries” (1972-73).  They are “The Dynamic Scooby-Doo Affair” (Episode 2, September 16, 1972) and “The Caped Crusaders Affairs” (Episode 15, December 16, 1972).
To this day, I am always excited about the worlds of Batman and Scooby-Doo coming together.  Obviously, The Batman & Scooby-Doo Mysteries is one of those comic book series that is perfectly made for me.
The Batman & Scooby-Doo Mysteries #2 has a villain, a mean-spirited Poison Ivy who does not mind making people sick.  However, the real story of “Rash Decisions” is Mystery Inc.'s Daphne Blake.  Writer Ivan Cohen offers a pleasantly surprising plot – Daphne playing Batgirl, and it works.  Barbara and Daphne make a great team, and I would enjoy them reunited in a future comic book.
As usual, Dario Brizuela's illustrations and Franco Riesco's colors are animation-inspired, with Brizuela summoning the ghosts of old Hanna-Barbera cartoons.  Everything about the story, art, and graphics, including Saida Temofonte's lettering, creates the vibe of classic kids' comic books that were based on television cartoon characters.  I can't wait to read the next issue.
Holy comics review, Batman!  Hopefully, this is the first of many reviews of The Batman & Scooby-Doo Mysteries.  I enjoyed this issue, so until next time, Scooby-Dooby-Doo!
I READS YOU RECOMMENDS:  Fans of the union of the worlds of Batman and Scooby-Doo will want The Batman & Scooby-Doo Mysteries.
[This comic book includes a 7-page preview of the original graphic novel, “Teen Titans Go! Undead?!,” by Michael Northrop and Erich Owens,]
A-
Reviewed by Leroy Douresseaux a.k.a. "I Reads You"
https://www.dccomics.com/
https://twitter.com/DCComics
https://www.facebook.com/dccomics
https://www.youtube.com/user/DCEntertainmentTV
https://www.pinterest.com/dccomics/
https://www.periscope.tv/DCComics/1ZkKzezXwZdxv
The text is copyright © 2022 Leroy Douresseaux. All Rights Reserved. Contact this blog or site for syndication rights and fees.
---------------------------