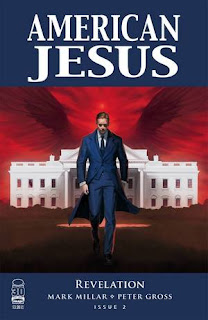 AMERICAN JESUS: REVELATION #2 (OF 3)
IMAGE COMICS
STORY: Mark Millar
ART: Peter Gross
COLORS: Jeanne McGee
LETTERS: Cory Petit
COVER: Jodie Muir
EDITORIAL: Sarah Unwin
VARIANT COVER ARTIST: Tomm Coker
28pp, Color, $3.99 U.S. (October 2022)
Rated M / Mature
American Jesus created by Mark Millar and Peter Gross
American Jesus is a comic book series created by writer Mark Millar and Peter Gross that is being published as three comic book miniseries.  American Jesus began life as Chosen, a three-issue miniseries that was published by Dark Horse Comics in 2004, and continued in American Jesus: The New Messiah, a three-issue series published by Image Comics in 2019-20.
The series concludes in American Jesus: Revelation, a three-issue series written by Millar; drawn by Gross; colored by Jeanne McGee; and lettered by Corey Petit.  The series offers the epic conclusion to the greatest story ever told.
American Jesus: Revelation #2 opens at the White House.  The world is gradually falling in line with the way Jodie Christianson want them.  But he is also the Chosen, the Anti-Christ, and now President of the United States.  But is this what he really wants?  Maybe, it's time to return to the old hometown, Peoria, Illinois, where he can have a meeting with an old friend.
Meanwhile, Catalina, who is the Savior and Christ-reborn, arrives at Vatican City, Rome.  This is her home, but no one seems to recognize her or her authority.  Is it because the Savior is now a Black woman?  Well, she gonna fix that and so much more.
THE LOWDOWN:  Netflix/Millarworld sent me PDF review copies of American Jesus, Vols. 1 and 2.  I had not read them until recently, and I needed to do so in preparation for American Jesus: Revelation.  But, as I said in my review of the first issue, nothing could prepare me.  Now, it's time for a review of the second issue and...
...Wow.  I don't know what to say, what I could say.  Of course, I'm enjoying this, as is usually the case with Mark Millar's creator-owned titles.  But I have never enjoyed any Millar title quite the (damnation) way I have American Jesus: Resurrection.
Peter Gross' wonderful storytelling entertains and scares me.  Gross is so good at conveying the … blasphemy of this that I may have to pay a stiff penance for loving it so.  And let's be honest; I do love the idea of Jesus Christ returning as a sista, girl.
With a sign of the cross, I recommend this hugely entertaining American Jesus: Revelation #2.  With a benediction and a clove of garlic, I bid us prepare for the finale to end all finales, come January 2023 … if the world doesn't end before then!
I READS YOU RECOMMENDS:  Fans of Mark Millar's comic books and of the American Jesus series will want to read American Jesus: Revelation.
A+
Reviewed by Leroy Douresseaux a.k.a. "I Reads You"
https://twitter.com/ImageComics
https://twitter.com/mrmarkmillar
https://twitter.com/netflix
https://www.mrmarkmillar.com/
http://www.millarworld.tv/
www.imagecomics.com
The text is copyright © 2022 Leroy Douresseaux. All Rights Reserved. Contact this blog or site for reprint and syndication rights and fees.
--------------------
Amazon wants me to inform you that the affiliate link below is a PAID AD, but I technically only get paid (eventually) if you click on the affiliate link below AND buy something(s).
Posted by Leroy Douresseaux at 4:51 AM