Comics Review: "NIGHT CLUB #1" - Sink Your Fangs Into This 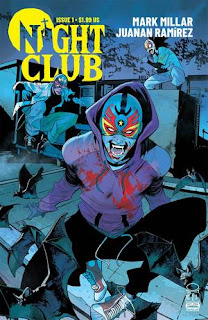 Night Club is a new six-issue miniseries written and created by Mark Millar and drawn by Juanan Ramírez.  An Image Comics publication and a Netflix production, Night Club focuses on a teen boy who is bitten by a vampire and decides to make the best of his new condition.  Colorist Fabiana Mascolo and letterer Clem Robins complete Night Club's creative team.

Night Club #1 introduces 17-year-old Danny Garcia.  He has roped his pals, DJ Sam Huxley and Amy Chen, into his scheme to gain fame and fortune as a YouTube star.  Things go awry and a vampire bites him.  So what should Danny do?  Should he live like a stereotypical vampire?  Or should he live crazy, sexy, cool like he has always wanted?

THE LOWDOWN:  Netflix/Millarworld sends me PDF review copies of the their comic books.  Thus, I was lucky enough to get a review copy of Night Club #1.

For the past three years, Image Comics has been publishing its best vampire comic book series, Rodney Barnes and Jason Shawn Alexander's Killadelphia.  Now, it appears that Image's may be offering its best vampire comic book miniseries, which I assume will be Night Club.  Mark Millar does what he always does, present a first issue that offers the perfect balance of character introduction, world building, and teasing of what is to come.  I find that I want to be in this world, and I really, really want to know more about it.

Juanan Ramírez's art brings Millar's story to life as a graphical narrative that zips across the pages and crackles with possibilities.  I also like how Ramírez's art always seems to be in the face of the characters, a move which made me want to invest in them.  The colors by Fabiana Mascolo are great, especially the scenes that take place at night and in the dark.  The coloring is another element that makes Night Club #1 stand out from other vampire comic books.  As usual, there is nothing like letterer Clem Robin's score – so to speak.

I'm recommending Night Club #1 because I know that the next issue is when the doors of the series really get blown open.  So you need to come into the club now.  It's a five-star type of place.

Also, to whomever designed that logo:  killer design, boo.  It recalls the spirit of Warren Publications and Hammer Productions.

I READS YOU RECOMMENDS:  Fans of Mark Millar and of vampire comic books will want read Night Club.

Posted by Leroy Douresseaux at 1:48 PM