Review: Terrifying "SMILE" Will Knock That... Smile Off Your Face 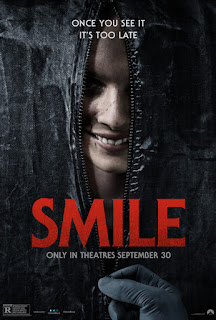 TRASH IN MY EYE No. 76 of 2022 (No. 1888) by Leroy Douresseaux
Smile (2022)
Running time:  116 minutes (1 hour, 56 minutes)
MPA – R for strong violent content and grisly images, and language
WRITER/DIRECTOR:  Parker Finn
PRODUCERS:  Marty Bowen, Wyck Godfrey, Isaac Klausner, and Robert Salerno
CINEMATOGRAPHER:  Charlie Sarroff
EDITOR: Elliot Greenberg
COMPOSER: Cristobal Tapia de Veer
HORROR
Starring:  Sosie Bacon, Jessie T. Usher, Kyle Gallner, Robin Weigert, Caitlin Stasey, Kal Penn, Rob Morgan, Gillian Zinser, Nick Arapoglou, Matthew Lamb, and Dora Kiss
Smile is a 2022 psychological horror film from writer-director Parker Finn, his debut feature film.  Finn based Smile on his 2020 horror short film, Laura Hasn't Slept.  Smile focuses on a psychiatrist who starts having terrifying experiences and witnessing a young woman's bizarre suicide.
Smile introduces Dr. Rose Carter (Sosie Bacon), a clinical psychiatrist.  While working at a psychiatric ward, Rose meets a new patient, a very frightened young woman named Laura Weaver (Caitlin Stasey).  Laura believes that she is cursed because days earlier, she witnessed her art history professor, Gabriel Munoz, die by suicide – using a hammer to bludgeon himself to death.  Now, Laura claims that an entity, which takes the form of smiling people, is haunting her and telling her that she is going to die.  Laura says that it is the same smile that she saw on Munoz's face before he killed himself.
After her encounter with Laura, Rose has a series of bizarre experiences, including one with a troubled patient in the psychiatric ward and another at her nephew's birthday party.  Is Rose's own traumatic past manifesting itself as an entity that vexes her mind and dreams?  Or is some entity haunting her to a gruesome death?
Smile is not the first film to use childhood trauma and the subsequent adult grief and guilt as devices to scare audiences.  [One is 2005's Boogeyman, which is not nearly as scary or as good as Smile.]  Parker Finn plays fast and loose with the genre and is rather tricky.  He makes Dr. Rose Cotter an unreliable narrator, one reason being that she should recognize her symptoms.  Rose has trouble distinguishing between delusions and reality.  Are her troubles a result of a job that exposes her to people with problems, or are her troubles really the result of a curse?  Finn's screenplay keeps us wondering about the truth and about the validity of the curse.
Sometime, the film is rather clear that Rose is cursed and that everything else is just to confuse … and scare the viewer.  And I was scared.  Smile is genuinely scary and, at times, terrifying, and Sosie Bacon gives a strong performance as Dr. Rose Cotter, a character that is obviously troubled and traumatized.
The one thing that keeps Smile from being great is the ending, not because of its variations, but because Finn practically telegraphs it halfway through the film.  Although I wouldn't say that Smile is a copy of the buzzed about horror film, It Follows (2014), but Smile follows... it.  I have no problem recommending Smile to viewers that want to be scared out of their wits by a horror movie, but don't want a high body count.  Smile is a really good horror movie – creepy but not slash-film violent.
7 of 10
A-
★★★½ out of 4 stars
Friday, December 23, 2022
The text is copyright © 2022 Leroy Douresseaux. All Rights Reserved. Contact this blog or site for reprint and syndication rights and fees.
----------------------------
----------------------------
Amazon wants me to inform you that the affiliate link below is a PAID AD, but I technically only get paid (eventually) if you click on the affiliate link below AND buy something(s).
Posted by Leroy Douresseaux at 3:43 PM