Review: Netflix's "THE POWER OF THE DOG" is Certainly a Movie 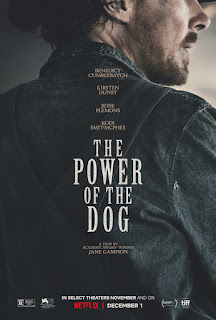 TRASH IN MY EYE No. 74 of 2022 (No. 1886) by Leroy Douresseaux
The Power of the Dog (2021)
Running time:  128 minutes (2 hours, 8 minutes)
MPA – R for strong sexuality and language
DIRECTOR:  Jane Campion
WRITER:  Jane Campion (based on a novel by Thomas Savage)
PRODUCERS:  Jane Chapman, Iain Canning, Roger Frappier, Tanya Seghatchian, and Emile Sherman
CINEMATOGRAPHER:  Ari Wegner (D.o.P.)
EDITOR:  Peter Sciberras
COMPOSER:  Jonny Greenwood
Academy Award winner
WESTERN/DRAMA
Starring:  Benedict Cumberbatch, Kirsten Dunst, Jesse Plemons, Kodi Smit-McPhee, Genevieve Lemon, Peter Carroll, Frances Conroy, Alison Bruce, Keith Carradine, Thomasin McKenzie, Ramontay McConnell, Adam Beach, and Maeson Stone Skuggedal
The Power of the Dog is a 2021 Western drama film from writer-director Jane Campion.  It is based on the1967 novel, The Power of the Dog, from author Thomas Savage.  The Power of the Dog the movie focuses on a charismatic rancher who torments his brother, his brother's new wife, and her son.
The Power of the Dog opens in rural Montana, 1925 and focuses on Phil Burbank (Benedict Cumberbatch).  Phil is, along with brother, George Burbank (Jesse Plemons), wealthy ranch-owners.  George meets Rose Gordon (Kirsten Dunst), a widow and inn owner, during a cattle drive.  The kindhearted George is quickly smitten with Rose, but Phil, always coarse and volatile, dislikes her and considers her nothing more than a gold-digger who wants George's money.
Phil also belittles Rose's teenage son, Peter (Kodi Smit-McPhee), whom he derides as weak and effeminate – a sissy.  George and Rose soon marry, and Rose comes to live at the Burbank brothers' isolated ranch estate and manor home. However, Rose withers under Phil's torment.  Sometimes later, Peter comes to stay and things begin to change...
The Power of the Dog is a ridiculous title for a film, but I like it for a novel.  The film is a psychological drama dressed in the rags of a Western.  Its narrative focuses on two despicable characters (Phil and Pete) and two meek, but lovable and sympathetic characters (George and Rose).
I would not describe any of the characters as vague so much as they reflect a narrative that is oblique, which in turn reflects on characters with pinched personalities.  Benedict Cumberbatch's Phil Burbank is mean and spiteful, but just like that, one day, he turns all … gay over a weirdo kid he only hated just a few seconds ago.  Kodi Smit-McPhee's Peter may be the film's most well-developed character; it is obvious that there is a lot going on with him.  He is more than the audience can imagine and apparently quite the litle psycho-sociopath.
As I said, Kirsten's Dunst's Rose and Jessie Plemons' George are lovable, but are slight characters.  They both received Oscar nominations in supporting acting categories; whether they deserved them or not is a matter of opinion.  I will say that Dunst spends most of the film crying and sniveling and yelling and stumbling around.  Jesse Plemons is barely a whisper in the wind as George, and sometimes it seems as if George's entire screen time amounts to only a few minutes.  Of course, he is onscreen more than that; it's just that he seems to be on it much less...
I can see why actor Sam Elliot questioned The Power of the Dog's credibility as a Western.  The film lacks a central, focused voice, and girl, Westerns have voice.  It is not a bad film.  The Power of the Dog does indeed have some power and some powerful moments, but director Jane Campion sublimates the passion and the urges she says define this film.  The film lacks heart and is unhurried to the point of being meandering.
My original plan was to write a review of The Power of the Dog that was comprised of a single question mark.  However, the film's shock ending gave me a reason to say more.  I guess I'm one critic who is not buying into The Power of the Dog.
5 of 10
B-
★★½ out of 4 stars
Saturday, December 10, 2022
NOTES:
2022 Academy Awards, USA:  1 win: “Best Achievement in Directing” (Jane Campion); 11 nominations: “Best Motion Picture of the Year” (Jane Campion, Tanya Seghatchian, Emile Sherman, Iain Canning, and Roger Frappier), “Best Performance by an Actor in a Supporting Role” (Kodi Smit-McPhee), “Best Adapted Screenplay” (Jane Campion), “Best Performance by an Actor in a Supporting Role” (Jesse Plemons), “Best Performance by an Actor in a Leading Role” (Benedict Cumberbatch), “Best Performance by an Actress in a Supporting Role” (Kirsten Dunst), “Best Achievement in Production Design” (Grant Major-production design and Amber Richards-set decoration), “Best Sound” (Richard Flynn, Robert Mackenzie, and Tara Webb), “Best Achievement in Cinematography” (Ari Wegner), “Best Achievement in Film Editing” (Peter Sciberras), and “Best Achievement in Music Written for Motion Pictures-Original Score” (Jonny Greenwood)
2022 BAFTA Awards:  2 wins: “Best Film” (Jane Campion, Iain Canning, Roger Frappier, Tanya Seghatchian, and Emile Sherman) and “Best Director” (Jane Campion); 6 nominations: “Best Screenplay-Adapted” (Jane Campion), “Best Leading Actor” (Benedict Cumberbatch), “Best Supporting Actor” (Jesse Plemons), “Best Supporting Actor” (Kodi Smit-McPhee), “Best Cinematography” (Ari Wegner), and “Original Score” (Jonny Greenwood)
2022 Golden Globes, USA:  3 wins:  “Best Motion Picture-Drama,” “Best Performance by an Actor in a Supporting Role in a Motion Picture” (Kodi Smit-McPhee), and “Best Director-Motion Picture” (Jane Campion); 4 nominations: “Best Performance by an Actor in a Motion Picture – Drama” (Benedict Cumberbatch), “Best Performance by an Actress in a Supporting Role in a Motion Picture” (Kirsten Dunst), “Best Screenplay-Motion Picture” (Jane Campion), and “Best Original Score-Motion Picture” (Jonny Greenwood)
The text is copyright © 2022 Leroy Douresseaux. All Rights Reserved. Contact this blog or site for reprint and syndication rights and fees.
---------------------------
---------------------------
Amazon wants me to inform you that the affiliate link below is a PAID AD, but I technically only get paid (eventually) if you click on the affiliate link below AND buy something(s).
Posted by Leroy Douresseaux at 2:14 PM