Review: "PEARL" Horror Film is as Crazy as It Wants to Be 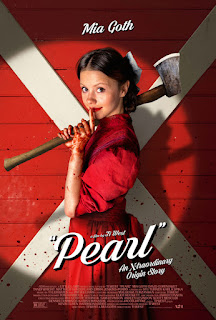 TRASH IN MY EYE No. 72 of 2022 (No. 1884) by Leroy Douresseaux
Pearl (2022)
Running time:  102 minutes (1 hour, 42 minutes)
MPA – R for some strong violence, gore, strong sexual content and graphic nudity
DIRECTOR:  Ti West
WRITERS: Ti West and Mia Goth (based on characters created by Ti West)
PRODUCERS:  Jacob Jaffke, Harrison Kreiss, Kevin Turen, and Ti West
CINEMATOGRAPHER:  Eliot Rockett (D.o.P.)
EDITOR:  Ti West
COMPOSERS:  Tyler Bates and Tim Williams
HORROR
Starring:  Mia Goth, David Corenswet, Tandi Wright, Matthew Sunderland, Emma Jenkins-Purro, Alistair Sewell, and Amelia Reid
Pearl is a 2022 horror film from director Ti West.  The film serves as a prequel to the 2022 horror film, X, and is also the second entry in the “X” film series.  The film focuses on a young woman who feels trapped on her family's isolated farm where she dreams of stardom and harbors a dark side.
Pearl opens in 1918.  In Europe, World War I rages on, and in the United States, the homefront is plagued by an influenza pandemic.  The story focuses on Pearl (Mia Goth), a young woman who lives on a Texas farm with her parents who are German immigrants.  Pearl's husband, Howard (Alistair Sewell), is serving in WWI.  Her domineering mother, Ruth (Tandi Wright), insists that Pearl always work, either tending to the animals or caring for her paralyzed father (Matthew Sunderland).
However, Pearl longs for a more glamorous life, and she visits the local cinema where she can watch silent films.  Pearl wishes she could be like one of the chorus girls she sees in her favorite films.  Pearl wants to be a star, but she also shows signs of being quite the disturbed individual:  killing farm animals, abusing her father, and thinking about killing people.
Pearl is certainly a horror movie, but the film is also a psychological drama and suspense and mystery thriller.  Writer-director Ti West and writer-star Mia Goth plumb the depths of Pearl's character, her conflicts, and her dreams.  Pearl is like other people, although she does not think so.  What makes her stand out is that he murderous impulses are not held in check and only get worse.
Pearl is also an edgy immigrant family drama that uses the clash between the old (the immigrant) parents and the new (Pearl the daughter) as a vehicle for Pearl's rage.  From the moment the story introduces Pearl's tiresome mother, Ruth, the family conflict devolves into a tawdry, yet alluring Gothic horror of the kind that recalls the work of the late novelist, V.C. Andrews (1923-86).  The demands of Pearl's parents, especially the bitter Ruth, with her ruthless tongue, push out the darker aspects of Pearl's identity and personality.
Pearl builds its suspense and mystery on a game of time and fate.  When will the repressed homicidal aspects of her personality, which Pearl seems to think of as her “true self,” come busting out?  Pearl's dreams might be pipe dreams, but in her performance, Mia Goth convinces her audience that Pearl really does want to perform for the people she believes could be her audience.  Pearl wants to be loved, but she believes that the real her cannot be loved, nor is true self worthy of love.
Pearl is complicated.  Horror films have long dealt with duality – killer and victim.  However, there is a strain of horror that deals with lead characters that are sometimes sympathetic.  They also turn out to have personality disorders that result in the compulsion to brutally kill people within their reach.  In the 1976 film, Carrie (based on Stephen King's 1974 of the same name), the title character seems to have her dark side forced out of her.  Pearl forces a light side of herself out into the world, but her homicidal nature does not need to be pushed out.  It does not need much coaxing to come out and play a game of death with unwary victims.
As a team, Ti West and Mia Goth deliver a truly unique cinematic work of horror and (yes) suspense in Pearl.  As Pearl the character, Goth is the pounding hell-spawned heart of this film, and it needs a strong heart.  Honestly, outside of Pearl the character, Pearl the film's plot, characters, and setting art surreal to the point of being too cute.
In the second half of the film, Goth has a delightful dance sequence that personifies to the depth of Pearl's character.  I can see why Oscar-winning director Martin Scorsese says that Goth's performance here is Oscar worthy.  Mia Goth liberates horror of its needs for scream queens, masked killers, final girls, and supernatural theatrics.  Pearl shows that horror movies can be quite horrifying simply by imagining the ultimate heart of darkness in its prettiest maidens, smiling waifs, and perky sprites – you know, the kind of female that is usually the victim in scary movies.
8 of 10
A
★★★★ out of 4 stars
Wednesday, November 30, 2022
The text is copyright © 2022 Leroy Douresseaux. All Rights Reserved. Contact this blog or site for reprint and syndication rights and fees.
---------------------------
---------------------------
Posted by Leroy Douresseaux at 4:16 PM