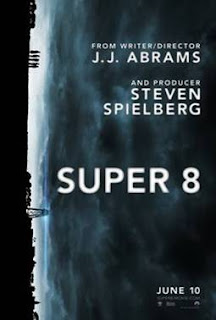 Super 8 is a 2011 science fiction/mystery/thriller written and directed by J.J. Abrams, perhaps best known as the co-creator of the former ABC television series, Lost. Abrams also co-produced the film with Steven Spielberg. In fact, Super 8 is inspired by Spielberg’s films from the 1970s and 80s, and while Super 8 is fun to watch, it in no way measures up to early Spielberg classics.

The film is set in the summer of 1979 in the fictional small town of Lillian, Ohio. The story focuses on Joseph “Joe” Lamb (Joel Courtney), a 14-year-old boy whose mother was recently killed in a workplace accident. Four months after the accident, Joe and his father, sheriff’s Deputy Jackson “Jack” Lamb (Kyle Chandler), are distant from one another. Joe spends his time helping his friend, budding filmmaker Charles Kaznyk (Riley Griffiths), make a low-budget, zombie movie on Super 8 film, with the help of their other friends, a small circle of boys.

The boys are able to convince an attractive teen girl, Alice Dainard (Elle Fanning), who also has access to a car, to play a role in the film. The youngsters head out to an abandoned train depot where they witness a massive train accident. Shockingly, the U.S. Air Force quickly arrives to secure the crash site, but Joe’s father, Jack, thinks that there is more to this crash than the Air Force is telling the locals. Soon people and animals begin to disappear and panic spreads. Separately, Joe and Jack begin to uncover the truth behind a closely guarded mystery that is decades old and hides a fantastic secret.

Anyone who is familiar with Steven Spielberg’s early movies knows that Super 8 is a pastiche of those films. While it is entertaining, Super 8 is dishwater to the champagne that is two particular Spielberg classics, Close Encounters of the Third Kind (1977) and E.T. the Extra-Terrestrial (1982). I found myself entertained by Super 8, but I wouldn’t go so far as to say that it is a classic summer movie, as some have declared. I will say that the one superior thing about it is the score by Oscar-winner Michael Giacchino (Pixar’s Up), which accounts for much of Super 8’s dramatic punch.

For all its plagiarizing of Spielberg, Super 8 has some excellent set pieces, a lot of really good moments, and some good characters, but the characters are where the film goes wrong. They are largely empty and underdeveloped – even under-utilized. There is a potent conflict and wall between Jack Lamb and his son, Joe; in fact, the troubled father-son relationship is a familiar theme in Spielberg films. Here, the father-son rift is just something to tack onto what is essentially just a monster movie. The great moments that are Jack and Alice together are few and far between and largely wasted – for various reasons. Also, for the most part, the characters are shallow, mere window dressing, and are no more than bit players to move us closer to big action scenes and scary moments.

In fact, much of this movie feels empty, yet I found myself endeared to quite a bit of it. It is technically well made, and there is potential in the characters, subplots, and setting for something really great. But the emotions are contrived and stunted (like the father-son reunion in the last act). J.J. Abrams was so busy making a Spielberg movie that he made something that is more a love letter to his idol and than it is a movie. Perhaps, what I like about Super 8 is that it reminds me of the good feelings I had watching Spielberg films when I was a kid.

Posted by Leroy Douresseaux at 10:55 AM