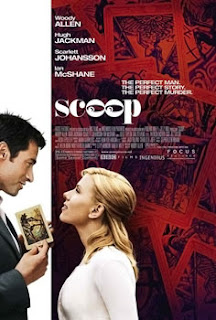 COMEDY/MYSTERY with elements of romance

In Woody Allen’s contemporary comedy/mystery, Scoop, a young American journalist may hit the jackpot when she chances upon a major news scoop – that she got from the ghost of a famous, but recently deceased newspaper reporter.

The late Joe Strombel (Ian McShane) is being mourned by his journalistic colleagues while he’s stuck in limbo with a news scoop. He’s just got a hot tip from a fellow spirit on the identity of the “Tarot Card Killer.” This serial killer has been at large in London for a few years now, killing prostitutes.

Meanwhile, Sondra Pransky (Scarlett Johansson), an American college journalism student, is visiting friends in London, when she attends the stage performance of another American, magician Sydney Waterman (Woody Allen), AKA “Splendini.” Going on stage to assist Splendini in one of his magic tricks, Sondra somehow also comes into contact with Joe Strombel. Strombel gives Sondra the scoop on the Tarot Card Killer and urges her to pursue what could be the story of a lifetime. Sondra jumps on this scoop and enlists the aid of a reluctant Sid, who pretends to be her father.

Strombel’s tip leads the intrepid duo to Peter Lyman (Hugh Jackman), a handsome aristocrat. Sondra feigns interest in Peter’s advances towards her, but soon she’s really fallen for the hunky nobleman. When the romance takes a turn for the serious, both Sondra and Sid wonder if she’s gone too far and put herself in danger.

Scoop was Allen’s second film shot in London (following Match Point), but it is less like Match Point and more like Allen’s New York-based films (such as comedy mystery Manhattan Murder Mystery and the comedy/drama Alice). Luckily, Woody Allen and Scarlett Johansson’s characters pretend to be father and daughter because they certainly wouldn’t have much chemistry as a much older man dating a (much) younger woman. As it is, Johansson and Hugh Jackman only have marginal chemistry as a screen couple, as the fiery Jackman and intense Johansson are only lukewarm here.

There’s not much here for viewers who aren’t Allen devotees, and there’s nothing new here even for them. Scoop is an Allen rehash that looks different only because London is standing in for New York City. Genial and harmless (and not inspiring enthusiasm), there are a few nice moments, but most of this flick is tepid. The script also lacks the sarcastic, droll, and biting dialogue found in even the most cookie-cutter Allen films.