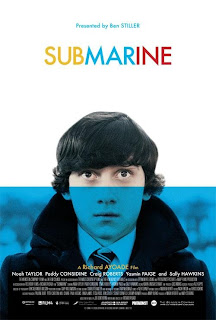 Submarine is a 2010 coming-of-age comedy/drama film that was released theatrically earlier this year (2011). The film is based upon the 2008 novel of the same title by author Joe Dunthorne and is also the debut directorial effort from British comedian and actor, Richard Ayoade. Actor/director Ben Stiller is one of the film’s executive producers. Submarine follows the story of a teenaged boy who wants to lose his virginity and to save his parents’ marriage.

Set in Swansea, a coastal city in Wales, United Kingdom, Submarine takes place in 1986 and focuses on 15-year-old Oliver Tate (Craig Roberts). Oliver thinks that he is a genius, although he is actually pretentious and socially alienated. He is in love with a classmate, a straight-talking girl named Jordana Bevan (Yasmin Paige), whom he hopes will relieve him of his virginity.

Oliver is also concerned that his parents’ sex life and, therefore, their marriage are failing. His father, Lloyd Tate (Noah Taylor), a marine biologist, is depressed. His mother, Jill (Sally Hawkins), is apparently flirting with Graham (Paddy Considine), the new age guru who just moved in next door and, surprisingly, was once Jill’s boyfriend. Oliver’s intense concern about his parents’ relationship threatens his own relationship with Jordana, who has troubles of her own at home.

When you think of movies about young men losing (or attempting to lose) their virginity, an insipid or coarse teen comedy might come to mind. Submarine isn’t really about sex, although many descriptions of the film focus on Oliver’s quest to get his cherry popped. Nor is Submarine a typical coming-of-age story; as Oliver says at one point: he doesn’t know if he has come-of-age or just gotten older.

Submarine is a character-driven story and is about a precocious teen who suffers from depression and is also a bit too self-absorbed. However, writer/director Richard Ayoade doesn’t study Oliver so much as he presents him, so the movie doesn’t really delve into the character. It’s as if Ayoade wants us to be amazed by Oliver, rather than dissect him, as much as we might want to dissect him (and I wanted to).

What makes Submarine such a good film is Craig Roberts’ performance as Oliver Tate. Whatever the screenplay may lack in depth, Roberts replaces with self-assuredness as a performer. He makes Oliver seem like an unaffected and authentic teen dealing with the mental wonky-ness brought on by puberty. Yasmin Paige also adds a salty sweet taste and sparklingly brightness to this moody comedy as Jordana.

And yes, Submarine is a comedy. Richard Ayoade pokes fun at how self-absorbed people are and at their obsession with self-gratification. Don’t worry. Submarine offers a happy ending that sparkles with airy magic as if it were a Hollywood romantic comedy.

Posted by Leroy Douresseaux at 7:16 AM