Review: "eXistenZ" is as Crazy as Ever (Happy B'day, Jude Law) 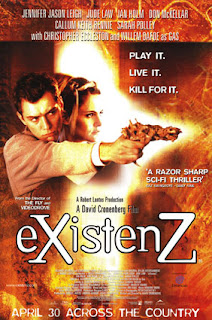 eXistenZ is a 1999 Canadian/British science fiction film from director David Cronenberg. The film is set in the near-future and involves advanced video games and organic virtual realities. When Cronenberg, a surrealist and master filmmaker, tests the bounds of imagination, he makes you wonder if there really are any boundaries to imagination, or at least to his. With a filmography full of movies that are trippy experiences, it’s hard to pick out the craziest Cronenberg picture, but I’d say eXistenZ is safe bet.

Allegra Geller (Jennifer Jason Leigh) is the world’s best game designer, and her new game, eXistenZ, is a virtual-reality masterpiece. During a demonstration or, perhaps, beta testing, of eXistenZ, a crazed fan makes a peculiar attempt on her life. Ted Pikul (Jude Law), a marketing intern at the company for whom Allegra designs games, spirits her away from the scene, but though they escape the murderous attempt on her life, this is just the beginning of a strange trip that takes them both to worlds real, unreal, and maybe real.

The usual Cronenberg themes: bodily invasion, altered states of perception, and what is real are much in evidence, but like some of his best work, eXistenZ questions what effect technology has on the human body, mind, and spirit. Cronenberg also seems to question whether humans should change their bodies and the way they live to accommodate a technology that is of only the most frivolous use – entertainment-based technology. That question permeates almost every frame of the film, and adds weight to the drama.

Many of the performances are stiff, although deliberately so, but still it’s a bit too wooden and too cold. Sometimes the acting is all a bit too affected and too smart for its own good. Jude Law and Jennifer Jason Leigh, however, give, wildly spirited and inspired performances; even their odd and taut moments have a vivacious air to them. They’re fun to watch, and the pair has a screen chemistry the just screams that this is a mismatched matched pair. For some reason it works, and they look gorgeous on the screen, making this truly odd tale fun to watch.

The best way to describe this story is too say that it deals with virtual worlds and computer generated realities like The Matrix did. eXistenZ, however, is not about cardboard philosophy, wire-fu fight scenes, and pyrotechnics and special effects as sexy eye candy. This is The Matrix for smart people.