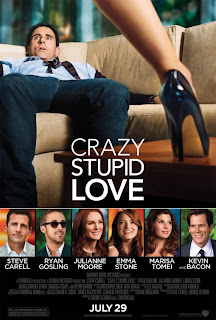 Crazy, Stupid, Love. is a 2011 romantic comedy starring Steve Carell (who is also one of the film’s producers) and Julianne Moore. The film is essentially an ensemble comedy, but the central focus is a couple whose 20-year marriage dissolves. The title fits the film perfectly, and Crazy, Stupid, Love. gets crazy and stupid enough to make me love it, in spite of my best efforts to act as if I were above liking this kind of romantic comedy.

While dining out one night, Cal Weaver (Steve Carell) gets some shocking news from his wife of 20 years, Emily (Julianne Moore). Not only does she want a divorce, but Emily also admits to having sex with one of her coworkers, an accountant named David Lindhagen (Kevin Bacon). Cal moves out of their home and begins to frequent a popular bar, where his complaints catch the sympathetic ear of a dashing young womanizer, Jacob Palmer (Ryan Gosling).

Jacob teaches the fine art of womanizing to Cal, who eventually begins a series of one-night stands. However, Jacob soon meets the one woman that can tame him, Hannah (Emma Stone), a young law student. In the meantime, Jessica Riley (Analeigh Tipton), the 17-year-old girl who baby sits Cal’s children, falls in love with Cal. However, Cal’s 13-year-old son, Robbie Weaver (Jonah Bobo), is madly in love with Jessica. As love goes mad all around him, Cal still can’t stop wanting to reunite with Emily, but does she want the same thing?

Crazy, Stupid, Love. could have the words “awkward” and “misunderstanding,” added to the title, as the film strains credulity with a number of timely coincidences. These lead to set pieces which depict one embarrassing moment after another for one or more characters. By the way, all the characters seem pretty much the same and are shallow; they are lovable, but still shallow. Still, mortification is what makes this movie such a sweet romantic film. Being married and/or being a parent is bittersweet, but you love your loved ones even in those moments when you hate them or when they embarrass and humiliate you.

Crazy, Stupid, Love., for all its contrivances, gets that, and Dan Fogelman’s script weaves the contrived and the coincidental into a lovely tale of committed love. There is a huge and shocking reveal in the movie’s last act and a speech near the end of the film that should both make us cringe. Instead, they exemplify the ability of Crazy, Stupid, Love. to make us stupid, crazy in love with it.