Review: Washington and Franklin Save "Out of Time" (Happy B'day, Denzel Washington) 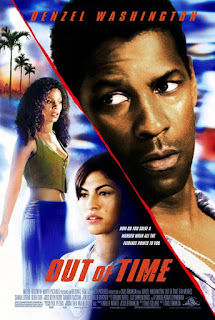 Director Carl Franklin (One False Move) and Denzel Washington previously joined forces to make the underrated noir thriller, Devil in a Blue Dress. They’re together again in the deliciously dumb crime thriller Out of Time. It’s dumb because its premise is stretched light years past the point of probability and reasonable suspension of disbelief. It’s hilarious, but not so dumb that’s it hard to watch. In fact, it’s quite delicious because, like the best thrillers, Out of Time is a riveting drama that hard to stop watching.

Mathias Lee Whitlock (Denzel Washington), the police chief of a small community in the Florida Keys, is having an affair with his high school sweetheart Anne Merai Harrison (Sanaa Lathan). After Anne is diagnosed with terminal cancer, Chief Whitlock gives her 500,000 in cash for an experimental cancer treatment. The problem is that Whitlock is supposed to hold onto the money because it’s evidence in a big time criminal case. When Anne disappears, Chief Whitlock suddenly finds himself knee deep in crap from an arson/double homicide, and the local FBI is pressuring him to give them the money for another criminal case. It doesn’t help that his estranged wife Alex Diaz-Whitlock (Eva Mendes) becomes an investigator in the homicide case, and Whitlock knows all the evidence is pointing at him as the killer.

For all the suspense movie clichés that the script gobbles, Carl Franklin is still able to create an incredibly intense police thriller. The characters are shallow, and the script short shrifts some of the better ones, though Washington’s Whitlock and John Billingsley’s Chae are quite captivating. Still, Franklin moves the players around like an adept gamesman and makes Out of Time very entertaining and fun to watch film. There may be no art here, but the movie shows all the signs of being directed by a master craftsmen. Denzel is a known property, as a star, an actor, and an artist. It’s time more film fans also recognize the fine director that Franklin is. Hopefully, he isn’t being slighted because of the prominence of melanin in his skin.