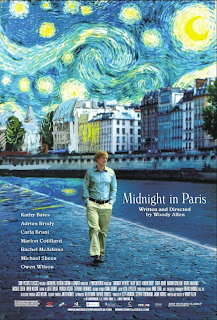 Midnight in Paris is a 2011 romantic comedy/drama and fantasy film written and directed by Woody Allen. The film focuses on a struggling novelist who has magical experiences in Paris which begin each night at midnight. Midnight in Paris is the first high-quality Woody Allen film since Match Point (2005), and it is his best film since the early to mid 1990s, certainly the best since Bullets Over Broadway (2004).

Gil Pender (Owen Wilson) is a successful Hollywood screenwriter, but he hates the kind of movies with which he is usually involved. He travels to Paris with his fiancée, Inez (Rachel McAdams), and her wealthy, conservative parents, John (Kurt Fuller) and Helen (Mimi Kennedy), for a vacation. Gil is struggling to finish his first novel, and he believes a permanent move to Paris would be a good thing. Inez, who wants to live in Malibu, sees this desire as a foolish romantic notion, and this disagreement is but one of many of the couple’s divergent goals.

One night, a drunken Gil wanders the streets of Paris. At the stroke of midnight, an antique car pulls up and the passengers, who are dressed in 1920s clothing, beckon Gil to join them. Gil soon finds himself in a bar enjoying a performance by Josephine Baker (Sonia Rolland), watching Cole Porter (Yves Heck) sing and play the piano, having a meeting of the minds with Ernest Hemingway (Corey Stoll), and chatting up Zelda (Allison Pill) and F. Scott Fitzgerald (Tom Hiddleston). Gil realizes that he has been transported back to Paris of the 1920s, an era he idolizes. He visits the home of Gertrude Stein (Kathy Bates), where he meets Pablo Picasso (Marcial Di Fonzo Bo) and Picasso’s mistress, a young woman named Adriana (Marion Cotillard). Gil and Adriana are quickly attracted to each other, but their strange romance also reveals their unhappiness with their current personal situations.

In a broad sense, Midnight in Paris specifically deals with nostalgia as a theme, especially people’s nostalgia for a time that existed before they were born – a golden age. For instance, Gil yearns for the 1920s, which occurred decades before he was born. Allen’s script allows Gil to revel in his ability to go back into the past, which is perhaps the only way for Gil to come to grips both with reality and with his idealization of a time in which he didn’t live. Allen resolves this in a way both sensible and satisfying.

On a personal and character drama level, Midnight in Paris plays with themes of denial and cognitive dissonance. The characters have desires and find ways to sabotage or sully their desires when they find them difficult to obtain or perhaps too costly. Both in his script writing and directing, Allen subtly tells us that only those who are honest with themselves about what they want can be happy.

Beyond that, I have to say that Midnight in Paris is just an utterly magical film. There are fantasy films that only feel like Hollywood action movie product and lack a sense of enchantment. Then, there are others that, when you watch them, you can feel the magic emanating and oozing from the screen. That’s how Midnight in Paris is, and Darius Khondji’s shimmering, golden-hued, ember-infused cinematography is a big reason why Midnight in Paris looks like one big enchanted holiday. This movie moves, sounds, looks, and feels like a romantic film.

I am a big fan of Woody Allen and have been for nearly 30 years. I love his films that take place in the past, like Radio Days (1987), which is set in a period when my parents would have been small children or toddlers. I also like his films that are infused with magic, like Alice (1990). For me, Midnight in Paris is the best of both those worlds. A lot of people may dismiss Allen, but they would have to be honest after seeing this film. Few feel-good movies feel better than Midnight in Paris.