Review: "Memoirs of a Geisha" is a Beautiful Film with a Beautiful Heroine (Happy B'day, Gong Li) 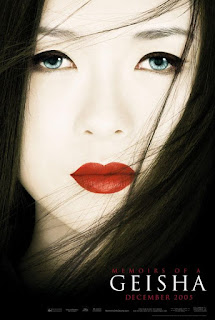 Memoirs of a Geisha is a 2005 historical and costume drama set in Japan during the Showa Era (1926-1989). The Academy Award-winning film is based upon Arthur Golden’s 1997 novel of the same name.

With her mother ailing in the years before World War II, a Japanese girl, 9-year-old Chiyo (Suzuka Ohgo), finds herself torn from her family when her penniless father sells her and her sister, Satsu (Samantha Futerman), to two Kyoto geisha houses. Chiyo endures harsh treatment from the owners of the okiya (geisha house) that buys her, and the okiya’s head geisha, Hatsumomo (Gong Li), who is envious of the nine-year-old’s stunning beauty and lovely eyes, is especially nasty. Hatsumomo’s chief rival, a geisha named Mameha (Michelle Yeoh), takes Chiyo under wing as a maiko (apprentice geisha).

In time, Mameha renames Chiyo, Sayuri (Ziyi Zhang), and she becomes Kyoto’s most famous geisha. Beautiful and accomplished in her profession, Sayuri charms some of the most powerful men of the day, but she loves one in particular, a man she met as a child and who is called The Chairman (Ken Watanabe). She hopes that one day The Chairman will chose to be her danna, the wealthy patron supports the geisha’s expensive profession. However, World War II and the post-war American Occupation threaten to take away her privileged lifestyle and make the burden of the secret love that haunts her even harder to bear.

Geisha means “art person” or “person of the arts.” Geisha skillfully entertainment men with music, dance, and conversation (which the do artfully), but geisha aren’t necessarily prostitutes, although after WWII, some young women called themselves “geisha” and prostituted themselves to American troops. Geisha were perhaps most common in the 18th and 19th centuries, and have become less common since.

The 2005 film Memoirs of a Geisha is based upon the 1997 Arthur Golden novel, Memoirs of a Geisha. The book is historical fiction, although Golden interviewed an actual geisha about her experiences for use in his book. The film earned high praise for its stunningly beautiful visuals, but many critics disliked the film’s supposed lack of narrative, slow story, and lack of substance. The film is indeed a visual feast. Cinematographer Dion Beebe’s (Chicago, Collateral) photography is supernaturally beautiful, and Beebe won an Oscar for making Memoirs look like enchanted eye-candy painted by an Old Master. The costumes, clothing, and uniforms are impeccable in their design as they are functional in their use, and some of them are super duper beautiful. Art, production, and sets do what the best of their kind do, transport the viewer to a world in which they can believe – a world that rings true, and one in which they might want to visit if not live. The candy coating is John Williams’ highly evocative and moving score that moves the narrative and provides the appropriate mood indicators.

On the other hand the narrative and story are not weak. Yes, the first 35 minutes of this film are so dull and slow, and the cinematography is so dreary, dank, and dark that to watch the movie is like doing a chore – mowing the lawn, cleaning the toilet, scrubbing scum, etc. It’s around the 35 minute mark that Ken Watanabe’s The Chairman enters the film, and Memoirs comes to life, allow the cast and crew to show their best talents in the glorious light of Beebe’s photography. Perhaps, many viewers are turned off by a story that focuses on the spiteful interpersonal politics of desperate and competitive women – cat fights, disputes over men, territorial pissing matches, etc. But it all rings true; all the fighting is genuine and captivating. The characters have depth and their struggles have meaning, and that’s why we can believe and empathize with the motivations of even the characters that are villains.

Something else that many reviewers may miss is that it is the cast through the characters not the script that carries this film. Of the many fine performances that mark this film (and it’s a shame that Ken Watanabe will likely be regulated to playing the Asian token in many American films), the trio of Ziyi Zhang, Michelle Yeoh, and Gong Li is Memoirs of a Geisha’s holy trinity. Li actually makes the malicious and spiteful force of nature, Hatsumomo, into a three-dimensional character worthy of study and sympathy. Michelle Yeoh is splendid as the motherly sage Mameha, and Ziyi is the top of the pyramid.

Oscar seems to have made a habit of ignoring Ziyi's luminous performances in such films as Crouching Tiger, Hidden Dragon and Hero (2002), and the Academy clearly wronged her here. With grace and subtlety, often with a facial expression and emotion more than with words, she shows us Chiyo/Sayuri as a resourceful hero who goes on a journey to claim her prize. It isn’t the ultimate prize, but it is the best for which she could hope in her position. By showing us a young woman finding happiness within the limits forced upon her, Ziyi shows us the face of Memoirs of a Geisha. Kept from being a near-perfect gem because its first half hour is garbage, the film recovers and makes the very best of what it has left, giving us two hours of the movie as a beautiful picture book containing a story about a heroine worth championing.