"Joyeux Noel" or "Merry Christmas" a Great Film by Any Name 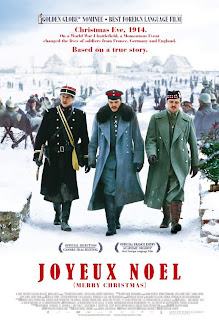 Joyeux Noël (Merry Christmas) is based upon a true story, on an event that occurred during World War I on Christmas Eve 1914. That night, soldiers walked out onto the “no man’s land” between their entrenchments and shared songs and friendship. Joyeux Noël (Merry Christmas), nominated for a 2006 “Best Foreign Language Film of the Year” Oscar as a representative of France, is a fictionalized account of that momentous event.

The outbreak of war during the lull of summer 1914 surprised millions of men, especially as the conflict pulled them in its wake. The first Christmas arrives, but the snow and multitude of parcels and presents from their families and their armies can’t really lift the men’s spirits. However, on Christmas Eve, a momentous event begins with songs and Christmas lights. Anna Sörenson (Diane Kruger), a soprano, and her singing partner, Nikolaus Sprink (Benno Fürmann), an exceptional German tenor; Palmer (Gary Lewis), an Anglican priest from Scotland who followed the men of his parish into the war; and Audebert (Guillaume Canet), a French lieutenant who left behind his pregnant wife when he went to war, become the major players in a miraculous event that changes their own lives and destinies.

On December 24, 1914, French, German, and Scottish soldiers come out of their trenches for an impromptu concert of Christmas carols and also for a Christmas Eve mass. For a few days, their hellish existence stops, and the soldiers swap food, wine, and stories and even play football (soccer). Not everyone, however, likes this strange turn of events.

Joyeux Noël is, make no doubt about it, an anti-war film, but director Christian Carion helms his film with such grace and subtlety. He makes his point by telling a story of the brotherhood of man, removing nationality and whatever divides humanity and going towards what made these soldiers alike. These men long for their families and homes, and amidst all the carnage, death, and destruction, they find an eye in the storm where they can relax, at least a little. For a while, they’re carefree boys again. Carion also juxtaposes these grunts in the trenches with the fat cat politicians, rulers, and officers who dine and entertain in warmth and comfort for in the rear.

Carion’s cast is as earnest as he is, but their determinism carries over to the story, revealing the characters to be people merely determined to have at least a little control over their lives and to be able to object to their situation even if they must ultimately submit. Scottish actor Gary Lewis is a standout as the brave and devout Anglican priest, Palmer, who calmly takes on that which tests his faith. Diane Kruger and Benno Fürmann as the opera singers give the film a humanizing romantic subplot that actually works. Guillaume Canet as Audebert and Dany Boon as Audebert’s valet, Ponchel, provide a nice subplot about a friendship that grows stronger once the men go to war. It’s these small stories that Carion weaves so well together that makes Joyeux Noël a Great War movie, and an ever greater Christmas film.

2006 BAFTA Awards: 1 nomination for “Best Film not in the English Language” (Christophe Rossignon and Christian Carion)