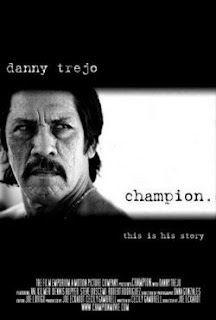 His body covered in tattoos, actor Danny Trejo has appeared in such films as Desperado, Con Air, and Spy Kids. Trejo is mostly known for playing tough guys, criminals, and villains. You’ll recognize him when you see him, and you may not be surprised to learn that Trejo has a past that includes substance abuse, drug dealing, and prison.

There is another side to Trejo. His troubled childhood, which included drug addiction, armed robbery, and extensive prison time, eventually led him to a career as a counselor, where his vocation became helping people who are struggling with alcohol, drugs, and gang-banging. That in turn led Trejo into acting, beginning with work in the 1985 film Runaway Train. The 2005 documentary Champion offers an intimate and detailed look at Trejo’s life and journey and includes testimonials from actors Steve Buscemi, Dennis Hopper, and Val Kilmer, among others.

The first hour of Champion mainly deals with Trejo’s troubled youth and a 20-year period from the 1950s to the late 1960s in which Trejo beat up people and/or robbed them, while selling drugs and doing time in juvenile and prison facilities. Although interesting, some of this first hour is repetitive or dry and slows the film. Then, Champion has a Saul-to-St. Paul moment and seems to suddenly open up, revealing the man who has a great big heart and a drive to help people. Champion is not a traditional documentary; in fact, it is essentially one long interview film. What the film ultimately documents is an inspirational story of how far up someone can come from being so down. Watch it and understand why Danny Trejo is indeed a champion.