Angelina Jolie's "Salt" is Good For You 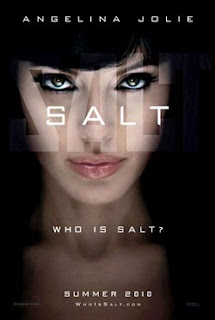 Written by Kurt Wimmer, the writer/director of the film Equilibrium, Salt was originally about a male character named “Edwin A. Salt,” and Tom Cruise initially wanted to play the character. A little more than half a decade later, the character became a woman, now played by Angelina Jolie. The resultant film is, in the hands of the supremely skilled director, Philip Noyce, one of 2010’s best movies.

Salt focuses on Evelyn Salt (Angelina Jolie), a CIA agent recently released from a North Korean prison. Salt’s plans to celebrate her wedding anniversary with her husband, arachnologist Michael Krause (August Diehl), is interrupted by a sudden turn of events at the CIA. Vassily Orlov (Daniel Olbrychski), a Russian defector, arrives with shocking secrets. During Salt’s interrogation of him, Orlov reveals details about “Day X,” a Russian plot to destroy the United States by using highly-trained, English-speaking, Russian sleeper agents. And Orlov claims that Salt is one of those sleeper agents.

Suddenly, a rogue CIA agent, Salt is on the run, and she uses every tactic, accent, and disguise she knows to elude her pursuers, clear her name, and find her now-missing husband. Her CIA supervisor, Ted Winter (Liev Schreiber), believes that she may not be an enemy, but U.S. counter-intelligence agent, Peabody (Chiwetel Ejiofor), absolutely believes that Salt is an enemy. To save herself, however, Salt may end up doing the very things Orlov said she would.

Salt has two stellar supporting actors in the talented Liev Schreiber and Chiwetel Ejiofor, who both deliver their usual good work in this film. Outside of Asian cinema, no one is capable of delivering terrific work in both dramatic films and action movies the way Angelina Jolie does. Jolie makes Evelyn Salt the kind of secret agent/spy who is every bit the man James Bond or Jason Bourne is.

Salt is a magnificent CIA/spy film, however, because of the work of director Phillip Noyce (Dead Calm, Clear and Present Danger). The Australian director is a master of the thriller: action thriller, historical thriller, political thriller, social thriller, suspense thriller, and thriller thriller. From the beginning of Salt, it was as if Noyce threw a rope around me and dragged me along for a ride, and what a great ride Salt was. Its action is so visceral and its narrative so visually powerful that you might choose to ignore the set pieces that seem way, way farfetched. I can find very little about which to complain or criticize.

At times, Salt is like a comic book superhero story, and it occasionally seems as much a fantasy as it is a CIA thriller. Noyce took his more-than-capable dramatic action star, Angelina Jolie, and spun what will hopefully be the beginning of a beautiful new spy thriller franchise.