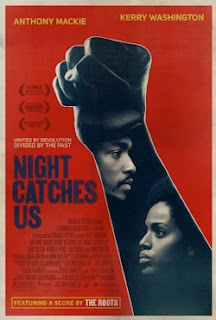 Films set in the past can be timely or relevant to the times in which they are released. For instance the 1970 film, MASH, is set during the Korean War (1950-53), but the film was relevant in the Vietnam era and can be viewed as being about the Vietnam War.

Released in 2010, Night Catches Us, an independent film drama from writer/director Tonya Hamilton, is set in 1976. Not only is it timely in addressing current social ills, but the film is also timeless in the way it depicts an oppressed group’s inability to move on from past hurts and persistent bitterness. Plus, Night Catches Us is an extra damn fine movie and dramatic piece of work.

The film focuses on Marcus Washington (Anthony Mackie), a former Black Panther who returns to his Philadelphia neighborhood in 1976 for his father’s funeral. Marcus immediately clashes with his brother, Bostic (Tariq Trotter), and also with much of the rest of this race-torn Philly neighborhood that is not so happy to see the return of a prodigal son. Marcus is still blamed for the death of a revered Panther, Neil Wilson (Tariq Rasheed), at the hands of the hated police years earlier.

One person who is welcoming to Marcus is Patricia Wilson (Kerry Washington), a local attorney and Neil’s widow. Marcus has deep feelings for her, and he quickly befriends Patricia and Neil’s daughter, an intelligent and inquisitive 9-year-old named Iris (Jamara Griffin). However, the police, mainly in the form a shady detective named David Gordon (Wendell Pierce), and “DoRight” Miller (Jamie Hector), a former minor Panther turned local boss, have targeted Marcus for their own benefit.

In Night Catches Us, Anthony Mackie and Kerry Washington give performances that are not only stunning, but also affirm their places as two of the best American actors. Generally, audiences don’t have a chance to see them since both are underutilized by the major American film studios. In this film, both actors give layered, textured performances that bring to the surface the thoughts and feelings of the characters. With subtly and grace, Washington reveals that which ultimately holds back Patricia, while Mackie bares Marcus’ steadfast believe in hope and change. (Yeah, he’s like President Obama, but with a touch of Clint Eastwood.)

Although they are exceptionally talented, one of the reasons both actors are so good in Night Catches Us is because the material is so good. Writer/director Tonya Hamilton reportedly spent a decade writing the script, and the extensive development shows in the writing’s intricacy It has the depth, complexity, philosophical underpinnings, and social themes of a great American novel.

Night Catches Us is timely because it speaks to the same ills that plague African-Americans living in poor neighborhoods, such as a lack of good jobs and the presence of police that are intolerant of the very people they are supposed to help. The screenplay’s timeless quality is the story’s ability to grapple with issues that have plagued African-Americans nearly for the entirety of our presence in America. Like many Black folk (generally speaking), most of the characters cannot escape to better because they fight with the bitterness of past hurts instead of trying to leave some of that past behind them. We can’t find happiness here, Kerry Washington’s Patricia Wilson declares at one point, but the film asks a more pointed question. Why won’t they and we leave?

What testifies to Hamilton’s skill as a director in Night Catches Us is the fact that she gets topnotch performances from her entire cast. It takes cinematic talent to get a multifaceted performance even from a child actor the way Hamilton does with Jamara Griffin as Iris Wilson. Night Catches Us is not just a great Black movie (which it is); it is also simply a superb American film.

Posted by Leroy Douresseaux at 1:51 PM