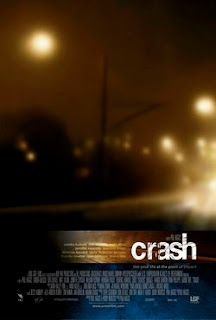 The lives of a diverse cast of characters from various ethnic backgrounds, of different skin colors (also known as “different races”), and including immigrants: a Brentwood housewife (Sandra Bullock) and her District Attorney husband (Brendan Fraser); two police detectives who are also lovers (Don Cheadle and Jennifer Esposito); an African-American television director and his wife (Terrence Howard and Thandie Newton); a Mexican locksmith (Michael Peña); two carjackers (Chris “Ludacris” Bridges and Larenz Tate); a rookie cop and his bigoted partner (Ryan Philippe and Matt Dillon) collide over a period of 36 hours.

Crash is one of the very best films of 2005 and one of the best films about America in ages not just because co-writer/co-producer/director Paul Haggis (he wrote the screenplay for Million Dollar Baby) deftly connects so many Los Angeles-based characters of different “racial” or ethnic backgrounds to a single event with such glowing intensity. It is also great because the film shows the acute problem this country has with such diversity. American’s have created so many stereotypes that they have attached as belonging to particular ethnic, religious, “racial,” and even professional groups. Those stereotypes, in turn, affect how we judge people in those groups, how we interact with others, and what we believe about others. In the end, all that pre-judging and predestination causes us nothing but trouble.

Haggis and his co-writer, Bobby Moresco, give us so many examples of the problems these characters make for themselves because of prejudice and because they make assumptions about people that are often wrong (and sometimes even dangerous), and Haggis and Moresco still manage to make a solid, engaging, and enthralling beginning to end linear (for the most part) narrative. They’ve created so many scenarios, characters, events, actions, and attitudes with which we will personally connect because every American can lay claim to bigotry and prejudice. Crash is as if Haggis and Moresco have turned the American film into a mirror and pointed it at us.

Of the many great scenes, one in particular defines why Crash is such a great American film. A Persian storeowner who is obviously an immigrant goes to a gun store with his daughter to purchase a gun that he really believes he needs to protect himself, his family, and, in particular, his business. The gun storeowner is not patient with a Persian who doesn’t speak English well, and though his daughter tries in vain to mediate the transaction, it goes badly between Persian and the “native” American storeowner – a white guy. The storeowner calls the Persian an Arab (all people from the Middle East are not Arabs), and makes the most ugly, most bigoted remarks about 9/11 connecting all Middle Easterners and/or Arab-types to the terrorist act that I’ve ever heard.

Watch that scene alone, and you’ll understand the power Crash holds in its bosom. If the film has a message, it is that sometimes we should stop and think. Despite differences in what we believe, in skin color, or in customs, we are more alike than we’d like to believe. The static of difference between us can be the thing that stops us from helping or understanding. Allowing the static to remain can lead to tragedy when we crash into each other.

That a message film can come with such powerful ideas and not be preachy, but be such a fine and intensely engaging film is what makes Crash a great one. Add a large cast that gives such potent performances (especially Matt Dillon, who redefines his career with his role as a conflicted, bigoted patrolmen, and Terrence Howard, who adds to his 2005 coming out party with this) and Crash is a must-see movie.

Posted by Leroy Douresseaux at 12:50 PM