Review: "Burn After Reading" is the Best Moron Movie 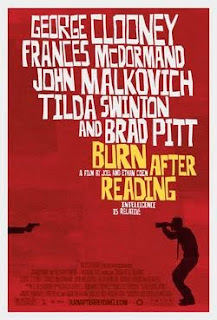 I certainly like Coen Brothers movies like No Country for Old Men and True Grit. These are classically formal, traditional Hollywood tales of murderous men and frontier justice done in the Bros.’ idiosyncratic style. These are the kinds of movie that will appeal to broad audiences and attract Oscar attention.

However, I prefer to watch the Bros.’ films that reflect their assumed quirky sensibilities: movies like The Big Lebowski, Intolerable Cruelty, and the 2008 flick, Burn After Reading. “Quirky” may not necessarily be the appropriate word. Coen Bros.’ films like Burn After Reading and the Academy Award-winning Fargo seem strange because, from top to bottom, the characters in these movies are unusually fascinating, especially compared to the characters that appear in most American movies.

Burn After Reading takes place in Washington D.C. It begins with Osbourne Cox (John Malkovich), a CIA analyst who quits his job in a huff and decides to write his memoirs. A compact disc copy of the memoirs ends up in the hands of two moronic employees of Hardbodies gym. After perusing the contents of the disc, Chad Feldheimer (Brad Pitt) and Linda Litzke (Frances McDormand) decide that Cox should pay them money to get it back. Meanwhile, Osbourne’s wife, pediatrician Katie Cox (Tilda Swinton), is having an affair with Harry Pfarrer (George Clooney), a womanizing U.S. Marshal and agent of the U.S. Treasury. When Osbourne refuses to pay them, Chad and Linda try to sell the disc to the Russian embassy, but that only makes things worse.

Joel and Ethan Coen are supernaturally good at creating characters that seem eccentric, odd, and even peculiar. When you look at them closely, however, you may discover how maddeningly, poignantly, and hilariously human they seem to be. Their motivations are petty and absurd, but oh-so familiar. Their lives are exciting, strange, and sometimes boring, and the characters are as dull as they are fascinating. The Coens fill Burn After Reading with such characters. This tale of Washington D.C. insiders and outsiders playing a poorly executed game of espionage is an unforgettable farce because of them.

As usual, the Coens get excellent performances from the cast, acting that brings such atypical screen characters to life. Once again, George Clooney is dead-on as (for the third time) a Coen Bros. fool. Frances McDormand’s sparkling dramatic turn is pitch-perfect for this farce, and she has marvelous screen chemistry with Brad Pitt, who once again proves that he is exceptionally good in supporting roles and character parts.

Burn After Reading creates a confederacy of dunces for our entertainment. This savage comedy about vain idiots who always think they have the goods on everyone else may one day be an American classic. Today, it is a slice of America that captures the entire American pie.