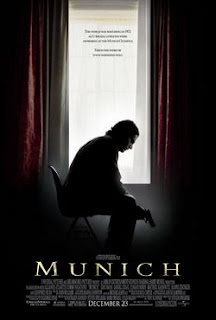 Steven Spielberg’s Munich is set in the aftermath of the real life massacre of 11 Israeli athletes at the 1972 Munich Olympics. The story follows a secret assassination squad, led by a former Mossad (Israeli version of the CIA) officer named Avner (Eric Bana), assigned to track down and kill the 11 Palestinian terrorists and operatives, whom the Israeli government suspects of having planned the Munich attack. The film focuses on the personal toll this mission of revenge and retribution takes upon the team, and in particular, Avner.

Many have argued that Munich has taken both sides in the conflict between Israel and the Palestinians, but I must have missed something because I didn’t see it that way. I viewed the film as a narrative that with medical precision shows how much it costs men to engage in one act of murder after another. This isn’t about a war where the fighters kill (mostly) faceless men. Avner and his associates (which includes the new James Bond, Daniel Craig, playing a gung-ho, American cowboy-type, Israeli named Steve) have to hunt these men down. In that way, they get to see them as more than targets. Yes, they may be murderers, and clearly they involve themselves in operations aimed at killing Israelis in terrorist attacks, but these aren’t dogs that Avner and his team are hunting. Eventually, killing people and endangering innocents (collateral damage) gets to be too much for them. The explosions, the gore, and most of all the finality of death – always watching, knowing, and talking to people they have to kill.

Avner misses his wife and child, and he begins to mistrust his Israeli bosses, in particular Ephraim (the truly astounding chameleonic actor Geoffrey Rush). Eventually, Avner and his team find themselves competing against American interests, the CIA, and Soviet interests, personified by the KGB, who protect and provide both material and financial support to some Palestinian terrorists. So many of the parties involved see Avner’s mission as some kind of game, a war game for sure, but still a game of capture and defend territory. There are platitudes galore about striking back and sending a message, but in this narrative, only Avner understands that this is dirty work, expensive dirty work. The costs will run into the millions, and will also cost many lives – lives that must often be violently snuffed out if one side is to win and/or survive. One has to wonder what the result of terrorism and the retributive answer to it will be. As one of the characters concludes, “There is no peace at the end of this.”

Still, through Munich, one can tell that Spielberg clearly believes that Israel had to answer the Munich murders with retribution (as do I). He also clearly loves Israel. At one point in the film, Avner’s mother (Gila Almagor) says of the founding of Israel that they (Jews) had to take the land because no one would give it to them, and that they needed a place on earth where Jews could live with other Jews. Spielberg may very likely believe this, but in Munich, he uses film to question Israel using swift retribution for every attack against it, although I don’t think that Israel has always answered every attack against it.

Perhaps, that is why the film meanders. It’s too long, and on just a few occasions it is too preachy – a few of those being embarrassingly preachy. Munich’s resolution is also soft – if there is one. I get the point that the director wants to say that there are no easy answers for this situation, but in saying that, the movie lumbers towards the end like an out of shape and slightly over weight athlete. Munich does indeed take a side (Israel), but the movie wonders about the other side (the Palestinians). Spielberg doesn’t really try to have it both ways, but he muddles the water enough with differing points of view. Still, what is one the screen is outstanding, powerful, and mesmerizing. I could have an adjective field day, but with its engaging performances – Eric Bana is rugged, handsome, and shows his soul with this performance – and taut action (the assassinations are as riveting as anything in the best war and action movies), Munich is must-see cinema for any Spielberg fan and any fan of cinema.