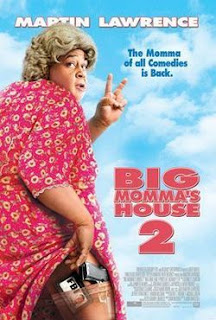 Eddie Murphy began his career as a standup comic and shot to fame as a cast member of NBC’s venerable sketch comedy variety series, “Saturday Night Live,” in the early 1980’s. By 1982, he had a hit movie, and by the late 1984 release of the film, Beverly Hills Cop, he was a certified movie star. Although he hit a dry patch at the turn of the decade in 1990, he redefined himself by appearing in family friendly live action films like The Nutty Professor and Dr. Doolittle franchises (both remakes of older films) and doing voiceover work in hit animated films such as Walt Disney’s Mulan and DreamWorks Animation’s Shrek franchise.

Martin Lawrence also began his career as an edgy “urban contemporary” or black comedian. The late 1980’s and early 1990’s found him in supporting roles and ensemble parts in several films. He had a hit show on the FOX Network, “Martin,” beginning in 1992. At the turn of the century, he had two big hit movies, one of them, 2000’s Big Momma’s House, was a surprise blockbuster hit. Then, the walls came tumbling down with a series of stumbles that began in 2001 with What’s the Worst That Could Happen? and Black Knight and continued with 2003’s National Security, before Bad Boys II righted Lawrence’s ship later that same year.

Martin has also recently remade himself from a formerly edgy comedian to one who now makes family friendly films. The first one, Rebound in 2005, was a misfire, but earlier this year, Martin once again donned the drag getup of an obese black matron in the (relatively speaking) surprise box office hit, Big Momma’s House 2. We find our intrepid hero, Malcolm Turner (Lawrence), married to Sherri (Nia Long), the target of his undercover investigation in the first film. Not only is he a stepfather to Sherri’s son, Trent (Jascha Washington), but he and Nia are expecting a baby in just a few weeks.

Wanting to spend more time with his family and stay out of danger for them, Malcolm took a desk job that sometimes finds him doing PR for the FBI (like dressing in a giant chicken costume and teaching children safety). However, an FBI agent and friend is murdered while investigating Tom Fuller (Mark Moses), a computer programmer who is creating a “worm,” that will allow foreign agents and outside enemies computer access into the most sensitive areas of government security information. Malcolm wants in on the investigation, but his superiors hold him to his request for desk duty.

But the story can’t stop there, especially when opportunity gives Malcolm a way back onto the job. The Fullers need a nanny, and Malcolm retrieves his fat suit, prosthetic face, and granny dresses from the closet. Before long, Hattie Mae Pierce aka “Big Momma” is back on the job and has wiled her way into Tom’s wife, Leah’s (Emily Procter), heart and becomes the Fuller’s nanny. Big Momma immediately starts searching the house for information on Tom’s activities, but before long Big Momma finds herself attached to the three Fuller children: teen goth girl with an attitude, Molly (Kat Dennings); unconfident cheerleader, Carrie (Chloe Grace Moretz), and three-year old Andrew (played by twins Preston and Trevor Shores), who hasn’t yet spoken a word, jumps from heights, and eats Brillo® pads and sand. Now, Malcolm as Big Momma is determined to help the Fuller kids through their difficulties and make their career-oriented parents spend more time with them. But will that comprise Malcolm’ mission and keep him from discovering the whereabouts of the worm Tom is creating and discovering the identity of the enemy agents trying to buy it?

I neither liked nor hated Big Momma’s House 2. It’s occasionally, mildly funny, although the last 20 minutes are actually the first time the film comes out of its stupor for something resembling a rousing ending. The first film really showcased Martin Lawrence’s talent for getting in costumes to create a variety of eccentric and wildly comic characters (of which we saw a lot in his series “Martin”). The sequel comes across as a cheap copy that mostly spins its and Martin’s wheels. The Big Momma act seems tired and desperate, even more so under the weight of the dull comedy written by Don Rhymer, the co-writer of the first film. There are times when Martin actually seems emotionally drained by returning to this role. It’s a look in his eyes.

Big Momma’s House 2 is a domestic comedy set in the home of an upper middle class family. The FBI half of the pic, which stretches the limits of suspension of disbelief and is full of holes, is just filler material for the family-based comedy and for Martin Lawrence’s new act – that of a family friendly black comedian. Big Momma is the beloved black matron teaching the nice white family how to come together and just love one another. Big Momma’s philosophy of “jus’ put it in the Lawd’s hand”-southern black Christianity and homespun wisdom are the essence of the quintessential black matron or mammy – a Hollywood and, let’s face it, American social fantasy.

That said, Lawrence gives Big Momma’s relations with the child characters more traction than this lame film deserves. There are times when she’s helping the family or rescuing one of the members when it looks like at least an ember of the old Big Momma fire is still there. Big Momma’s House 2 is a family flick, in spite of the sexual innuendo and assorted crudeness. So don’t see it expecting the madcap romp we got the first time. See it for what it is – a kids' movie with loads of potty humor.