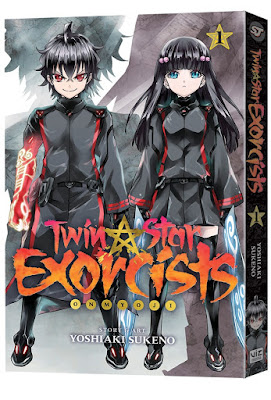 Series About A Pair Of Mystical Warriors With Intertwined Destinies Launches In Print And Digital In July!

Created by Yoshiaki Sukeno, TWIN STAR EXORCISTS is rated ‘T’ for Teens and will be published in print with an MSRP of $9.99 U.S. / $12.99 CAN. The series also launches digitally on July 7th via VIZManga.com and the VIZ Manga App, as well as from the Nook, Kobo, Kindle, iBooks, comiXology, and GooglePlay stores. Future volumes of the series, which is ongoing in Japan, will be published domestically twice a year under VIZ Media’s Shonen Jump imprint.

In TWIN STAR EXORCISTS, Rokuro is from a family of exorcists who exorcise the evil Kegare, but he’d rather be a singer, a soccer player or anything but! He’s forced to own up to his own incredible potential when new arrival Benio stirs his competitive spirit—and is in need of rescue. But their rivalry gets a twist when they learn they are the “Twin Star Exorcists” – two supreme fighters fated to marry and birth the prophesied child who will eliminate all the Kegare in the world. Too bad they can barely stand each other!

“TWIN STAR EXORCISTS is an electrifying and hilarious new manga series about a pair of unlikely mystical partners and their intertwined destinies that drew significant acclaim from fans and readers during its initial serialization in Japan in Jump Square magazine,” says Annette Roman, Editor. “Will these rivals fall in love? English readers now have the opportunity to dive into the action as the fate of two worlds hangs in the balance!”

Manga creator Yoshiaki Sukeno was born in 1981 in Wakayama, Japan and graduated from Kyoto Seika University’s School of Manga. In 2006, he was selected for a Tezuka Newcomer Award. In 2008, he began the supernatural manga comedy Binbougami ga!, which was later adapted into the anime series Good Luck Girl in 2012.